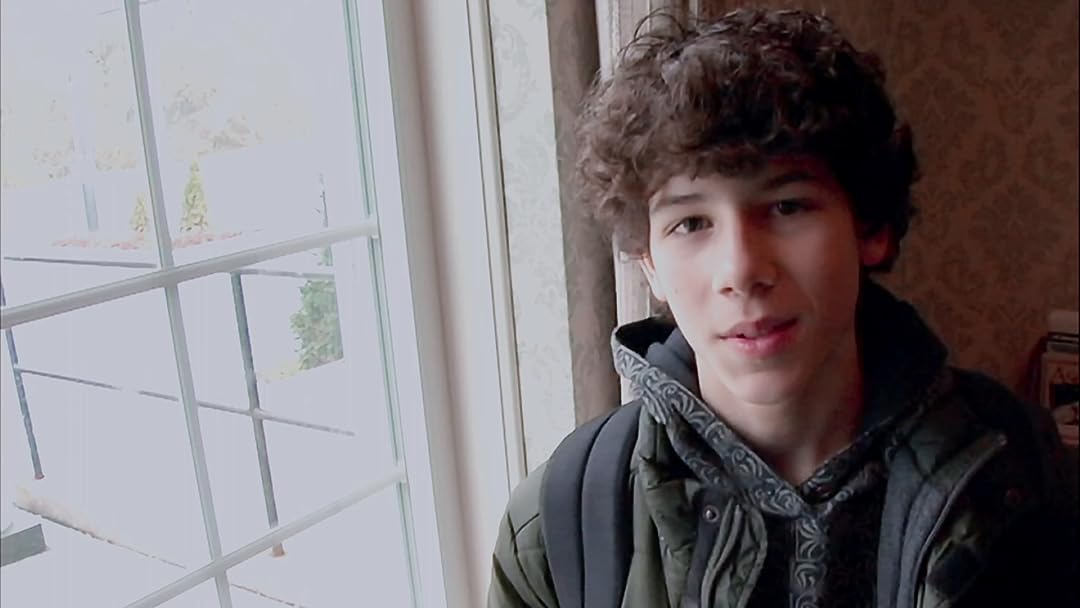 (1,195)7.81 h 36 min2019X-RayUHD16+
Chasing Happiness is a story of brotherhood. From humble roots as pastor’s sons in New Jersey, through their meteoric rise to fame, the Jonas Brothers’ bond was unshakeable—until a surprising and painful breakup led Joe, Kevin and Nick down very different paths. With deeply personal interviews, previously unreleased footage and exclusive music, this is the Jonas Brothers as never seen before.

CassandraReviewed in the United States on June 4, 2019
5.0 out of 5 stars
Happiness: Chased. Fans: Blessed.
Verified purchase
I've been a Jonas Brother fan for a long time, and can remember everything about the morning they went on GMA to announce their official split. My middle and high school years were supported by their uplifting music, and eventually led me to meet and make some of my best friendships while at Ohio State because of our shared love of their music.
To watch this documentary and see just how unhappy and stressed their relationship had become, provided answers to so many questions fans like myself have had since that October day they split up.
My respect for the Joe, Kevin, & Nick throughout the events that led to this point in their personal and professional lives has grown exponentially. I wish I had known all of the pain and tension between them when I met them at their concert in Cleveland on July 15th, 2013 (a few months before Nick sat everyone down to end things) (and yes I know the date by heart don't @ me).
From a technical standpoint, the organization of this documentary is smooth and entertaining. As a fan who knows her Jonas history, I appreciated the details of their upbringing and how much time was spent establishing them as brothers in a band versus a band conviently put together because they were brothers. You did not need to have this prior knowledge to get the full effect, so if you are new to their music, don't feel like you have to click away. The pacing was good, not dwelling on the "Disney" days, but rather those defining moments that definitely took them off the path to happiness. There were moments of nostalgia, several that made me laugh and / or cheer out loud (specifically around the 45min mark), and those that broke my heart. I appreciated the individual interviews from fellow band members, Big Rob, producers, and family members who witnessed the process "from the outside looking in," so to speak. The included musical selections were great, and the piece overall reminded me of how much happiness these guys have brought me. If I had to give a complaint, it would've been nice to see a little more of the now / healing process through this lense rather the televised interviews to come in the near future.

There were definitely years in their career where (from a fan's perspective) they felt larger than life, so the opportunity to see and hear them speak in such vulnerable ways humanized and therefore set them apart from what other groups try to do when presenting their "why". The reason I, and so many fans appreciated them, was their ability to find those connection points, and in "Chasing Happiness," I believe the Jonas Brothers take the journey to the dream and show that not every part leads to happiness if you don't actively prioritize it. I could say so much about these guys as far as growth goes, but this is a product review and I'll share those thoughts on a platform where they might actually read it (Twitter). (If you are interested in those thoughts, though, I'm happy to share if requested.)
Overall, a great documentary that illustrates how, even with the garabage life can throw at you, you can go chasing happiness with those who lift you up while also inspiring others in the process.

JessicaReviewed in the United States on June 4, 2019
5.0 out of 5 stars
I bought prime just for this
Verified purchase
This film made me feel like I'm 9 years old again (on my myspace account that my parents didn't know about) crying over these 3 guys from Jersey, whose first album I listen to on my MP3 player on the bus each morning. The Jonas Brothers were my entire life at the most critical ages of development, and I'm so blessed to have found a band that promoted love and happiness. I'm glad they found their way back to each other, and I hope for nothing but continued success. (It will come as long as they keep their heads in the right place; and I can't wait to continue to be there along for the ride.) #TeamJonas #BRP #Bulldozer

SuzanneReviewed in the United States on June 6, 2019
1.0 out of 5 stars
.
Verified purchase
I was never a Jonas fan really as I was older when they came out, but thought it might be interesting to watch. It was ok until Joe (?) started dropping the F bomb. I really hate when people can't express themselves without using foul language...buy a dictionary....learn new words. (Show some class)
123 people found this helpful

Brandon HerreraReviewed in the United States on June 4, 2019
5.0 out of 5 stars
The Best Celebrity Documentary Anyone Could Find
Verified purchase
Anyone who watches this movie will come away with a deeper understanding of who the Jonas Brothers are and what it is that they are doing. I became a fan of the Jonas Brothers when I was 12. I had no idea what I wanted to be, or who I wanted to be, but I knew that I could find happiness through their music.
Now I'm 23, and a soon to be published author. I feel like I can connect to them so much better now then I did as a pre-teen. The Jonas Brothers come across struggles just like the average person, and this is something that the movie portrayed in the best possible way. The movie felt like I was finally having my questions answered that I'd been wondering about for the past decade. It's so cool how they opened up in the movie. The emotion in the film was honest and raw. I recommend it to anyone who wants to dream, hope, or do something more in life.
102 people found this helpful

inkReviewed in the United States on June 4, 2019
5.0 out of 5 stars
Hit the feels...
Verified purchase
I remember when they announced the breakup and it was like... that can't be right... they do everything together, they are brothers, they care about each other. Thinking about it now that I am older, it made sense. They needed to find out who they were individually vs. as a unit. They needed to find themselves apart from each other.

My sister and I would have loved to see them in concert, just cannot afford the tickets.

This documentary hits you in the feels, when Kevin is talking about his daughter and how she's never seen him be great... little does he know, I'm sure his daughter thinks he is the greatest no matter what he's doing.
69 people found this helpful

BanaszewskiReviewed in the United States on June 4, 2019
5.0 out of 5 stars
The Jonas Brothers are BACK TOGETHER!
Verified purchase
Wow. What an incredible documentary. I was a Jonas fan "back in the day", so I loved watching this and seeing their behind-the-scenes take on their rise to fame. I carried a lot of resentment over their break-up, but this really helped me understand why it happened and helped me heal. I loved the sneak peaks of their new songs, especially Rollercoaster. The boys are all grown up now! SO thankful this documentary happened and brought the band back together!
53 people found this helpful

SharonReviewed in the United States on June 4, 2019
5.0 out of 5 stars
You are Cool!
Verified purchase
I didn’t know what to expect from this documentary but it was everything I could have asked for. With such pure emotions from all of the brothers it brought tears down my face, so have some tissues ready. Seeing the brothers change over the years from their childhood to adults was more than what I ever saw as a fan and learning how the band came to be not one time but three times is inspiring.

PS: Kevin, you were and still are cool! I wish you the best of luck with the band and hope the fun never ends!
43 people found this helpful

Saved by GraceReviewed in the United States on June 8, 2019
1.0 out of 5 stars
Warning! Inappropriate for kids.
Verified purchase
This was totally inappropriate for kids. I watched it with my daughters (14 yrs old) because it wasn't rated. It should be rated R with the amount of bad language and drinking. Just a warning to those whose children may want to watch this. My girls liked the Jonas Brothers years ago when they were associated with Disney. They obviously have had issues and it would have been nice if they did a documentary that was appropriate for kids. Especially since they were a band for kids originally.
38 people found this helpful
See all reviews
Back to top
Get to Know Us
Make Money with Us
Amazon Payment Products
Let Us Help You
EnglishChoose a language for shopping. United StatesChoose a country/region for shopping.
© 1996-2021, Amazon.com, Inc. or its affiliates