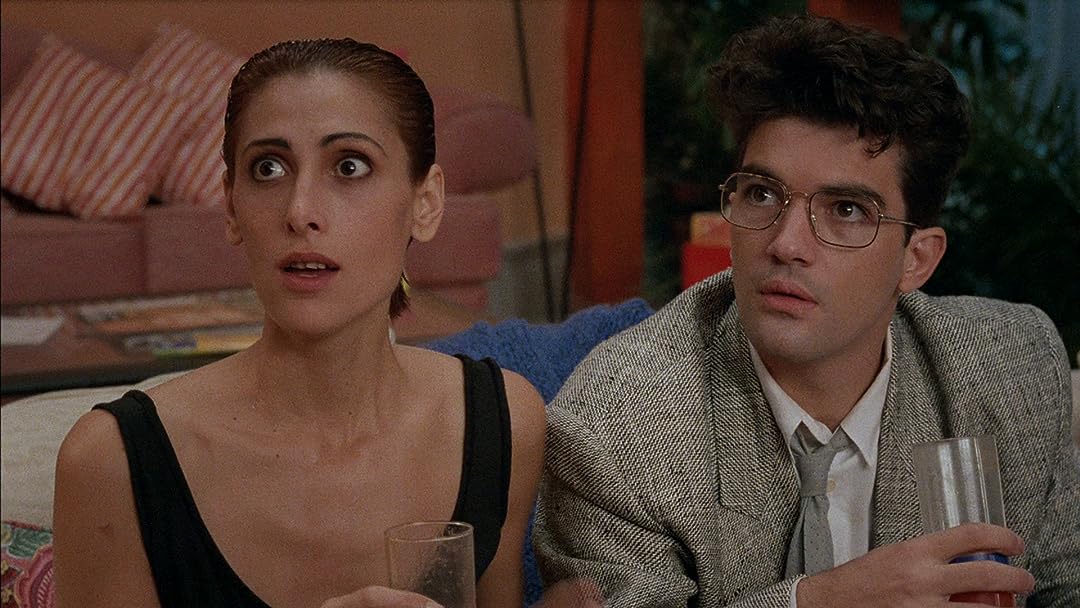 Women On The Verge Of A Nervous Breakdown

(750)7.61 h 29 min1988R
A woman's lover leaves her, and she tries to contact him to find out why he's left. She confronts his wife and son, who are as clueless as she. Meanwhile her girlfriend is afraid the police are looking for her because of her boyfriend's criminal activities. They talk to a female lawyer, who turns out to be the lover's new lover, and everyone's path keeps crossing each other's in a very complica..

John P. Jones IIIReviewed in the United States on May 13, 2021
3.0 out of 5 stars
A rather dull edginess…
Verified purchase
Admittedly I’ve been on the art theater circuit of films ever since I had to read the subtitles (imagine that!) in 1963 for the very prescient movie “Sundays and Cybele.” European film directors just seemed to provide movies with more intellectual meat in them, a push beyond a standard formula. “Edgy” is a favorite cliché. There was Francois Truffaut, Federico Fellini and others. I continue to be enthralled by Werner Herzog and Krzysztof Keslowski. After watching Pedro Almodovar’s “Talk to Her,” which was definitely “edgy,” I was willing to call Almodovar the Spanish Keslowski.

I found “Women on the Verge…” to be a major disappointment. Perhaps it was due to the fact it was produced much earlier in Almodovar’s career, 14 years before “Talk to Her.” It commences with surrealistic images of women walking, highly reminiscent of Fellini’s “8 ½.” And I did like the allure, and, oh yes, the acting of Carmen Marua, as Pepa.

Dare I say it? Others have though, and I will follow in their footsteps to bemoan the sexism of the Latin nations, which would include Spain, as well as the Continent that bears that moniker as a preface, that was settled by Spain. As the title suggests, the women are portrayed as being a bit too “ditsy,” though, of course, such creatures do exist. There are elements of slapstick and satire, but overall, it just did not work for me, including Pepa's obsession with Ivan.

I was stunned by one scene, however. Javier Marias, the Spanish author I greatly admire, and hope might be awarded the Nobel someday, wrote ten short stories that were translated into English and released with the title: “While the Women are Sleeping.” I read and reviewed it in 2011. The cover to Marias’ collection of short stories was a painting on the wall, in the background, with sleeping pills in the foreground, to this 1988 movie. Clever, admittedly. And a tad edgy.

Also, Almodovar’s doppelganger is the cab driver in the movie, with a resemblance so strong that the “Trivia” section had to say that the cab driver was NOT Almodovar. Still, a bit of cleverness here and there was not enough to rescue the movie from a 3-star rating, and I am feeling generous today.

MinnieReviewed in the United States on September 27, 2020
5.0 out of 5 stars
Oldie but always a goodie....
Verified purchase
I remember seeing this movie soon after my daughter was born. Loved the craziness of it. The story was absolutely original. Lots of fun to watch. Don't take this movie seriously just sit back and enjoy the wild ride. Always a favorite of mine.
2 people found this helpful
Report abuse

D'voReviewed in the United States on February 2, 2021
5.0 out of 5 stars
comedic genius
Verified purchase
when your lover has a lover ... and so on. when communication breaks down. when you start thinking about what love and happiness really are. this film.
Almodova is brilliant and I am still laughing and thinking 30 years later.
beautiful 2k film restoration.
plenty of extras.
One person found this helpful
Report abuse

Luis HernandezReviewed in the United States on April 12, 2001
5.0 out of 5 stars
A True Classic in International Cinema
Verified purchase
Filmed in the style of the screwball comedies of the 1950's, Pedro Almodovar's classic, "Women on the Verge of the Nervous Breakdown," is widely seen as the Spanish director's greatest directorial effort ever, due to his witty script, wonderful use of colors and schemes, and his ability to capture the range of emotions women possess.
The story, which revolves around a jilted woman (Carmen Maura in her final film collaboration with Almodovar) in search of her lover (Fernando Guillen) might sound like a melodrama at first, however if you mix in a bit of zany subplot and an array of classic characters, and you got yourself a comedy classic.
Pepa (Maura) finds out that her longtime lover Ivan has left her for another woman. Pepa, who works with Ivan dubbing foreign films into Spanish, discovers that she is expecting a child, and must convey this important message to Ivan in hopes of convincing him to return.
In her search for Ivan, she discovers that Ivan's ex-wife Lucia (Julieta Serrano) has been released from the asylum that has taken care of her since her breakup with Ivan. She also discovers that Ivan has a son (Antonio Banderas) she never was told about, and due to a series of coincidental encounters, they encounter each other.
Pepa doesn't seem to be the only person having love problems. Her best friend Candela (Maria Barranco) has discovered that her Arab boyfriend and his friends are actually Shiite terrorists planning to hijack the next flight to Stockholm. Scared, confused, and out of her mind, Candela finds refuge in Pepa's penthouse, and along with Pepa, Carlos (Banderas), and Carlos' fiance (Rossie de Palma), the madcap hysteria that will overtake the later half of the film takes place.
Using a wide selection of colors that benefit from the film's use of Technicolor, Almodovar has definitely creating a visual feats of patterns, objects (notice the clocks at the beginning), cityscapes (Madrid's famous skyline), and especially colors (as the main character, Pepa is identified by reds, which probably is Almodovar's tribute to American director Nicholas Ray and his famous use of Technicolor red in the classic "Rebel Without a Cause"). Other eye-catching objects that make this film truly wonderful include Candela's coffeepot earrings (they became a major fashion accessory in Spain and Latin America in the early 1990's) and the campy cab decor that the driver of the Mambo Taxi (Guillermo Montesinos) has adopted for his cab.
Almodovar also adopted a wide selection of beautiful and popular music and songs to tell his story. "Soy Infeliz," by Lola Beltran and "Puro Teatro," by La Lupe are eternal classics thanks to this film. His selection of the rarely heard, yet beautiful compositions by Russian composer Rimsky-Korsakov ("The Story of the Kalandar Prince" from Scheherezade-Symphonic Suite, Op. 35 AND the "Fandango Asturiano," from Capriccio Espagnol. Op. 34) gives the film both a feeling of relaxation and fiery anger.
"Women on the Verge of a Nervous Breakdown," marks a totally new direction in Spanish cinema. The end of the censorship that was widely well known during the Franco regime of the past allowed Almodovar and many new Spanish directors to explore filmmaking without any restrictions. This film, which was nominated for Best Foreign Film at the Academy Awards in 1989, went on to win many awards including several Goya awards (Spain's highest film awards) and Maura went on to win Best Actress at the Venice Film Festival. Truly, this was her greatest role, and Almodovar knew that he wanted to give his audience a major overdose of Maura that the audience will likely beg for more. He was right, and Maura's performance is considered to be one of the greatest performances by non-English speaking actress in recent years.
If you're looking for an amazing, funny, and visual film, then "Women on the Verge of a Nervous Breakdown" is the best choice to fulfill your search. I have seen this movie over 30 times, and I can't get tired of it. It is a true cult classic, and it only illustrates the genius that Almodovar is. The DVD edition contains English, French, and Spanish subtitles and the film's promotional trailers.
22 people found this helpful
Report abuse

Gracie VReviewed in the United States on August 17, 2016
5.0 out of 5 stars
Excellent Movie!
Verified purchase
This is one of my absolute favorite movies and I was so excited that I could download it rather than having to pay a ridiculous price for an imported DVD.

Whether you lived in Spain during the 80s or not, you will find this movie every bit as bizarre as the 80s everywhere actually were. But you will also see a very adorable young Antonio Banderas and that chick whose name I'm always forgetting, not to mention the great Carmen Maura.
4 people found this helpful
Report abuse

Rafaela RennerReviewed in the United States on November 14, 2019
5.0 out of 5 stars
Hilarious
Verified purchase
I love this movie! Yes it’s from the 80’s so the outfits aren’t anything to die over but who cares! The acting is fantastic and this movie will leave you in stitches. Great movie if you need a laugh.
Report abuse

Eric H. JonesReviewed in the United States on December 14, 2010
5.0 out of 5 stars
An excellent film of subtle strength
Verified purchase
I watched this film again after some years, and I am still struck by the artistry of the camera work. This film has also always had an instant comedic appeal for the absolute madcap moments and the bizarre story line that weaves the lives of three women and their crises together. Yet, after a number of viewings and the passage of time, I am more than ever struck by the subtle strength the lead character, Pepa, conveys in a world of machismo. I believe it takes several viewings, or perhaps a little bit more cultural knowledge of Spain than I had before, to understand how subtle this expression of strength and perseverance actually is. This is a sort of subtle protest film, not anything like an outspoken American feminist would create or expect. Instead this film is simple, sincere, and subtle. Under all that simple and wry hilarity is a deep expression of women truly struggling to express themselves, be themselves, and find themselves, in a male dominated society. I believe that it is an excellent film both men and women can appreciate and enjoy.
9 people found this helpful
Report abuse

JoanReviewed in the United States on January 9, 2014
5.0 out of 5 stars
Still works for humor and finesse
Verified purchase
Almodovar os a well known Spanish director. This film from the early 90's got a lot of attention in the US when it first came out. It's hilarious in that it is made through the moods, whims and dialog of women. Oh Yes, there are men in the movie most notably Antonio Banderas as a young young man before he came to the US as a star. If you understand Spanish, the movie will be enjoyable for you. If you don't, just read the sub-titles and go with the flow.
Almodovar, himself, has a small part as a gay, crazy taxi driver in one scene.
7 people found this helpful
Report abuse
See all reviews
Back to top
Get to Know Us
Make Money with Us
Amazon Payment Products
Let Us Help You
EnglishChoose a language for shopping. United StatesChoose a country/region for shopping.
© 1996-2021, Amazon.com, Inc. or its affiliates