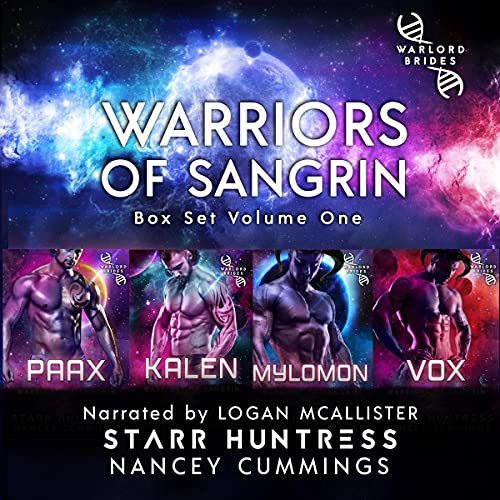 Earth's protection comes at a price!

Discover the Warlord Brides universe with growly, protective alien warriors who will do anything for their mates. Contains four complete books: Paax, Kalen, Mylomon, and Vox.

He never wanted to be matched to a mate.

The situation in his clan was dangerous for a hardened warrior, let alone a soft Human female without fangs or claws to defend herself. Sending her back to Earth was the only way to keep her safe. However, the moment the curvaceous woman stepped off the transporter, his tattoo burned with a passionate intensity he’d never experienced before. Paax knew he would do anything to protect her, to claim her, even challenge the clan’s violent Warlord.

No force in the universe would take his mate from him.

Fierce and independent, nurse Meridan was never interested in settling down, with a human or an alien, especially not the arrogant, rude, and devastatingly sexy medic Kalen.

How far will Kalen go to claim the woman he loves when the rules between his planet and hers prevent him from doing just that?

The lone survivor of a horrific experiment, warrior Mylomon was left with unique and dangerous abilities. He takes care of the necessary dirty work for his clan but he’s yet to earn their trust. After all, how can you trust an assassin?

Now that he’s found his fated mate, his miracle, she recoils at the sight of him. Daisy is every good and sweet thing in the universe and he will not let her go. How can he convince her that he’s not the monster he appears to be?

He had dreamed of a mate for years.

He studied Earth cultural and courtship rituals. He even learned to eat strange Earth food, waiting for the day his mate arrived.

From the moment the curvy human woman stepped onto his ship, he knew she was everything he’d craved.

Kindle Customer
4.0 out of 5 stars Very good
Reviewed in the United States 🇺🇸 on June 30, 2022
Verified Purchase
I have a bunch of your books and they don't really disappoint. Please don't throw in woke BS in your romance novels. We have to deal with enough BS in real life. Thank you
Read more
Helpful
Report abuse

Katie Weber
5.0 out of 5 stars Enjoy so much
Reviewed in the United States 🇺🇸 on May 31, 2022
Verified Purchase
Love good alien trash/smut then this is for you.
I know I've enjoyed the while series. And reading too.
Read more
Helpful
Report abuse

Nana
4.0 out of 5 stars Warriors of Sangrin: Collection Books 1-3
Reviewed in the United States 🇺🇸 on April 20, 2020
Verified Purchase
These stories are mostly about the relationships between selected women and alien men. There is only one part of the story that has any conflict between the invaders and the women’s chosen men. These stories are definitely romance and are not meant to be real science fiction.
Read more
Helpful
Report abuse

Melissa
4.0 out of 5 stars box one
Reviewed in the United States 🇺🇸 on March 1, 2020
Verified Purchase
Personally I liked this box set and felt it was a good value purchase. I plan to buy the next box set.
Read more
Helpful
Report abuse

Kindle Customer
4.0 out of 5 stars A very good read.
Reviewed in the United States 🇺🇸 on March 18, 2020
Verified Purchase
The characters are believable and the inter-play is very good. You have romance, sabotage, humor and near death. Moreover there is a baby on the way. What else could you want?
Read more
Helpful
Report abuse

NMIG
2.0 out of 5 stars Desperately needs editing
Reviewed in the United States 🇺🇸 on February 25, 2020
Verified Purchase
These books take top prize (by a long shot) for the most spelling mistakes and grammatical errors I have ever encountered. The story’s content was nearly lost among the multiple errors on nearly every page. At times the meaning was impossible to comprehend because of missing words or partially rearranged sentences.
Is this what self-publishing (I have to presume) has left us with? Authors who don’t bother to do basic edits of their writing(or have someone else do so). It is an insult to those who pay for their books - and it drags down these genres. Very poorly done!
Read more
3 people found this helpful
Helpful
Report abuse
See all reviews

Kindle Customer
4.0 out of 5 stars loved them all
Reviewed in Germany 🇩🇪 on May 10, 2022
Verified Purchase
Im addicted to this series, it’s hard to choose one favorite out of them all they are so good. I highly recommend these fabulously sweet and sexy aliens.
Read more
Report abuse

Sarah Williams
4.0 out of 5 stars Loads of fun
Reviewed in Australia 🇦🇺 on September 18, 2020
Verified Purchase
Loved each one. Each story was different, but they were all sweet, steamy adventure. Paax was hot. Kalen was quirky. Mylomon was thrilling. And I loved the wry humour in Vox.
Read more
Report abuse
See all reviews