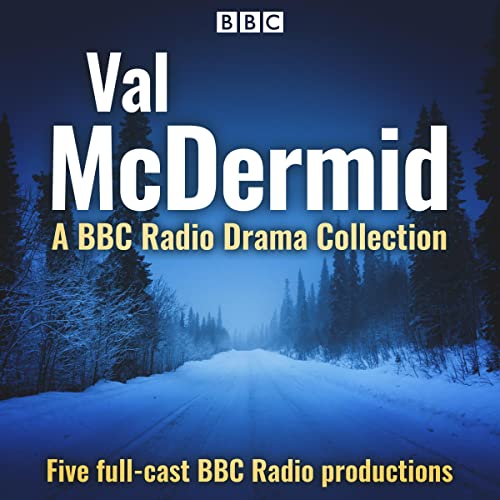 Award-winning 'Queen of Crime' Val McDermid has sold over 17 million books worldwide, and been translated into over 40 languages. Her Wire in the Blood series was adapted for TV, starring Robson Green and Hermione Norris, and ran for six seasons. Included here are full-cast adaptations of several of her acclaimed novels, as well as four tales specially written for BBC Radio.

Clean Break - When a Monet is stolen from a stately home where she'd arranged the security, Manchester-based PI Kate Brannigan sets off on a chase across Europe that brings her face-to-face with organised crime. Starring Charlotte Coleman.

The Right Chemistry - Jane Hazelgrove stars in this follow-up to Clean Break, which sees Kate embroiled in a deadly case of industrial sabotage, blackmail, counterfeiting and murder.

The Distant Echo - Late one night in the snow, four students stumble upon the body of a dead girl. 25 years later, the police launch a cold-case review of the unsolved murder—but is the killing over? A thrilling dramatisation of the first Karen Pirie novel, starring Jimmy Chisholm, John-Paul Hurley and Claire Knight.

Resistance - Midsummer, and 150,000 revellers are partying at the Solstice music festival. But then people start to get sick with a mystery illness: one that's highly contagious and seemingly resistant to antibiotics.... Gina McKee stars in this chilling, apocalyptic drama.

Same Crime, Next Year - Set in Harrogate, this gripping tale imagines the fallout from the torrid affair of two crime writers. Read by Siobhan Redmond.

Your audiobook is waiting!
Learn more about membership
List Price: $15.99
You Save: $2.00 (13%)
By completing your purchase, you agree to Audible’s Conditions Of Use
Sold and delivered by Audible, an Amazon company

How customer reviews and ratings work


Your recently viewed items and featured recommendations
›
View or edit your browsing history
After viewing product detail pages, look here to find an easy way to navigate back to pages you are interested in.