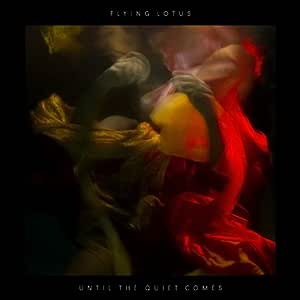 Add to Cart
$24.99
& FREE Shipping on eligible orders. Details
Sold by: Amazon.com
Have one to sell?
Sell on Amazon

Until The Quiet Comes

Composed, according to FlyLo, as ''a collage of mystical states, dreams, sleep and lullabies'', Until the Quiet Comes has the distinct feel of this nocturnal trip. From the twitching descent into a subconscious state and the out-of-focus time-ether of the journey that follows, the sound is an unhinged, yet elegant evolution of the melodic and rhythmic interplay that is woven into the DNA of Flying Lotus' aural personae. The album, featuring guests Erykah Badu, Laura Darlington, Niki Randa, Thundercat & Thom Yorke, is set for release on October 2. UTQC is fueled by FlyLo's first ever full US Tour, multiple videos, creative visual assets and massive support from his ever-growing group of press and fans. Notable followers include Odd Future (Earl Sweatshirt collaboration with Adult Swim online now), Schoolboy Q (who's been in the studio) and rising super-producer Clams Casino.

4.5 out of 5 stars
4.5 out of 5
88 customer ratings
How does Amazon calculate star ratings?
Amazon calculates a product’s star ratings based on a machine learned model instead of a raw data average. The model takes into account factors including the age of a rating, whether the ratings are from verified purchasers, and factors that establish reviewer trustworthiness.
Top Reviews

echoe
5.0 out of 5 stars The Lotus Blooms
Reviewed in the United States on October 4, 2012
Verified Purchase
Not that he had much growing to do, but this CD is a step up from Cosmogramma. Hopefully you're buying it now. I listened to it via NPR's 'First Listen', then ended up listening to it another few times before writing this. People say albums are 'growers'. In this case, it isn't really that the album's growing, but that you need to be able to understand what the album's doing. It's kind of a rush of sound.
Unlike Cosmogramma, Until the Quiet Comes doesn't tend to show off. The beats are fairly minimalistic - there are multiple things going on but if you want you can pick each individual beat or groove out easily. It gives the beats air to grow in, like planting a flower and watching it bloom because there aren't any leaves blocking its light.
Until the Quiet Comes is best when you listen to it straight through. I liked Cosmogramma specifically because I would put it on and not hear most of it - I would be doing something while listening to it and would occasionally tune it out. But at the end of the CD I always felt better, somehow. I would notice it was off not by the absence of sound, but by the bad mood that came with its absence.
I smiled after this CD was finished. I'd been lulled into not analyzing certain parts - I think that's by design. The high points are very high, and the low points don't exist.
If you like electronica or whichever of the many genres FlyLo fits into, you should pick up this album. He's the only artist, at this point, whi's gotten to the point where I instantly buy his CD's.
I'd say my favorite tracks, in order of appearance on the album, are All In, Getting There, All The Secrets, Putty Boy Strut [the video is also fantastic], Hunger [the section after 2:22], me Yesterday//Corded, and Dream to Me.

clevelandjunglist
5.0 out of 5 stars A very emotionally active album
Reviewed in the United States on October 12, 2013
Verified Purchase
I remember finding FL's Los Angeles album and liking that a lot, Cosmogramma I had mixed feelings on albeit he's never done a track with Laura Darlington that I wondered about - Table Tennis was a shining example of solid work.

This album seemed like it was an even further distillation of an emotional idea. The problem with rating electronic music that people fall into all too often is that its easily, perhaps like rock, to worry about the athleticism of the gutarists, how many chords he can bust out in a minute, how fast and accurately a drummer can drum, whether the band puts on a great stage show of the singer doing backflips, swallowing swords, breathing fire, etc. and with electronic music it seems like people complain rather quickly if something's not happening in the music that's a brand new production trick or something that really wows on technical merit or complexity.

I actually liked it a lot, it seemed incredibly lucid in terms of emotionally knowing what he wanted to get out of his mixes. The way I tend to rate electronic music is how well a picture conveys a thousand words or how well a tune conveys a thousand pictures. Stuff that drills deep, goes archetypal, that's the kind of thing that gets me going - ie. its real, its gritty, there's something in it where they reached quite a ways deeper into their own minds than most people are used to.

I'd still argue that this is another step forward along FL's path of expression. It's very much an aural DXM trip, even more intensely psychedelic than his past work while staying thoughtful and observant as always. Will be great to see what he comes up with next. For me though, as someone who grew up in the rave scene from 1997 forward and particularly in dark drum & bass - the communication of the music and what's communicated as well as how well an album makes something like a stellar dj set means more to me than whether or not FL did something that absolutely knocked the socks off the world as having never been done before; in 2013 that's getting pretty damn hard for anyone to come up with.

That said I'm happy enough to find an artist who can emotionally and spiritually keep me interested. I'll stick with circus soleil for juggling and fire-breathing entertainment.
Read more
Helpful
Comment Report abuse

D. A. Nelson
5.0 out of 5 stars Electronic Pioneer
Reviewed in the United States on November 13, 2012
Verified Purchase
Flying Lotus is really in a class/genre by itself. Often pushing the limits of what has been done musically ends up sounding sloppy, overdone, or extremely difficult to appreciate. What makes this album great in my mind is that it is so different from the vast majority of what is out there, yet is still easy to listen to and enjoyable throughout. The versatile use of synths/electronic beats and sounds keeps you interested while the intermittent interwoven melodies add an extra layer of enjoyment. Rarely to you find an album where each track flows together well yet each song creates an almost completely different feel. There is so much going on that it really does take a few listens to appreciate, but is not too difficult to enjoy on first listen.

When comparing to the first album, I think this one ventures even more into the uncharted realm of electronica where the first record still had some semblance of a consistent back beat and some even radio-friendly tracks (dare I say). I couldn't find any tracks on this album that stood out separately as 'And the world laughs with you.....' and 'Do the Astral Plane' did on the first album. I think this one flows a little better because of it. Overall, though, it's difficult to really highlight major differences given the uniqueness of all Flying Lotus' music.

I look forward to much more groundbreaking sound from this artist.
Read more
One person found this helpful
Helpful
Comment Report abuse
See all reviews from the United States

Sir Richie Rich
4.0 out of 5 stars Flylo does it again
Reviewed in the United Kingdom on February 14, 2013
Verified Purchase
This is a cool album. Full of sounds and beats with some great tracks. One of my favourites is Putty Boy Strut. Probably not as good as his earlier more hip-hop based stuff though but still well worth a listen.
Read more
2 people found this helpful
Helpful
Sending feedback...
Thank you for your feedback.
Sorry, we failed to record your vote. Please try again
Report abuse

What other items do customers buy after viewing this item?