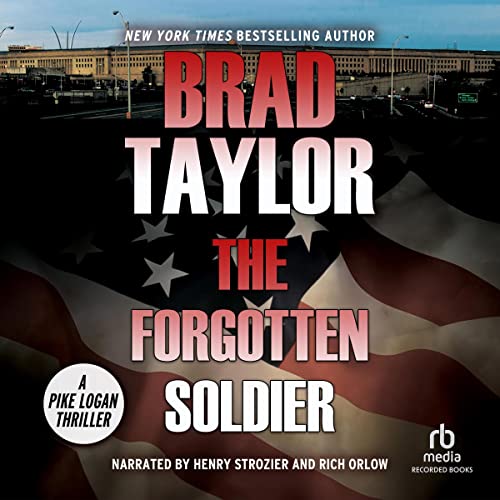 For years the extralegal counterterrorist unit known as the Taskforce has worked in the shadows, anticipating and preventing attacks around the globe. Created to deal with a terrorist threat that shuns the civilized rule of law, it abandoned the same, operating outside of the US Constitution. Though wildly successful, it was rooted in a fear that the cure could be worse than the disease. And now that fear has come home.

A Special Forces soldier is killed on an operation in Afghanistan, and complicit in the attack is a government official of an allied nation. While the US administration wants to forget the casualty, one Taskforce member will not. When he sets out to avenge his brother's death, his actions threaten not only to expose the Taskforce's activities but also to destroy a web of alliances against a greater evil.

Pike Logan understands the desire but also the danger. Brought in to eliminate the risk, he's now forced to choose between his friend and the administration he's sworn to protect while, unbeknownst to either of them, the soldier's death is only the beginning....

Amazon Customer
5.0 out of 5 stars An amazing writer
Reviewed in the United States on February 12, 2016
I was fortunate to meet Brad Taylor at the book release in Dallas. This book as well as the previous Pike Logan novels are books that I will read again and again. He is such a talented writer and keeps you captivated from beginning to end. The books are so here and now. The conflict and turmoil that is actually happening in countries overseas that really doesn't touch the average American is written in these books. They're exciting, entertaining, and very frightening! The Forgotten Soldier ranks as one of Brad Taylor's best. You won't be disappointed.Thank you Mr. Taylor for your years of service to this country!!!!
Images in this review

Kelly Q.
5.0 out of 5 stars great read
Reviewed in the United States 🇺🇸 on August 21, 2022
Verified Purchase
I loved the story, the places, the shenanigans of the Task Force. Always adventurous and captivating. Every book leaves you wanting more adventures. Ready to read the next book!
Read more
Helpful
Report abuse

Steven Hildreth, Jr.
VINE VOICE
5.0 out of 5 stars Darkest Taskforce Novel Yet
Reviewed in the United States 🇺🇸 on April 1, 2018
Verified Purchase
Retired Delta Force operator Brad Taylor's Pike Logan series is, hands down, one of the hottest and most enjoyable thriller series on the market today. With the action, authenticity, and real-deal character building from a man who has lived that life.

THE FORGOTTEN SOLDIER is the most gripping and darkest entry to date.

A family member of a Taskforce operator has died in combat operations. The killers have connections to a prominent Middle Eastern government. With the Oversight Council opting to ignore the operator's evidence, he goes off the reservation to avenge his brother.

In turn, the Oversight Council deploys Pike Logan and his team. They are to capture the operator and stop him from causing an international incident. Worse, they are implicitly ordered to kill the operator if they cannot bring him in alive.

Throughout the Pike Logan series, Taylor has hinted at how badly the Taskforce could be abused if they went off the reservation, individually or collectively. This time, he made it a central focus of the novel, and made it his most gripping novel yet. It is incredibly dark as the operator slips into the abyss, something with which Pike Logan is intimately familiar.

Over nine novels, Taylor has managed to continue developing his characters. This time, the focal point of development was Pike, using the rogue operator as a mirror. It was excellently done. And, as always, the plotting and action are top notch. I could go on and on about that, but anyone who has been reading my reviews of the Pike Logan novels already knows what I'll say.

My only (very minor) gripe is that it could have been darker. Call me a twisted individual, but I would have loved if things went absolutely as dark as they could get. But, that isn't enough of a gripe to detract from the overall rating.

All in all, excellent, action-packed, character-rich novel. Highly recommended.

Gidget
5.0 out of 5 stars Wow. Just wow!
Reviewed in the United States 🇺🇸 on December 31, 2015
Verified Purchase
This newest adventure of Pike Logan and the Taskforce gets into the hard reality and residual affects of the worst part of combat, losing one of your own. The struggle in the mind of an Operator between the mission his government has given him and their own sense of right and wrong is explored in great depth here and it leaves you with an even greater respect for the Taskforce members.

While going through the box of personal effects from his brother, recently killed in Afghanistan, Guy George, a seasoned Taskforce operator, discovers that there might be more to the story of his brother's death than the official story. Slowly slipping into the dark side, Guy goes rogue to get the truth and avenge his brother's death. The Taskforce is sent to stop him, and it's not easy to track one of your own who knows all the tricks of the trade. Especially when the Secretary of State has himself become unintentionally working with terrorists.

There is non stop action in this book that keeps you on the edge of your seat and an extra dose of humor that is mixed perfectly with times of grief and the hard examination of one's own conscience and loyalty. It also highlights Pike's empathy for Guy from his own near fatal trip to his darkest side. Not just Pike but everyone on the Taskforce goes through their own self examination and it is brilliant. A great story and plotline with an entirety new view of our favorite characters. I can't recommend it enough.

I don't know how Brad Taylor manages to do it better each time but he does. This time, he's exceptional. If you're not already a fan of his books, you are missing out. It's always worth it, and he's outdone himself with The Forgotten Soldier.
Read more
8 people found this helpful
Helpful
Report abuse

William Lotz
4.0 out of 5 stars Gone, but not Forgotten
Reviewed in the United States 🇺🇸 on January 24, 2016
Verified Purchase
This novel opens with a man named Guy George receiving a box from FedEx at his apartment. It contains the leftovers of his brother Timothy, who has been killed in a far away land that most of America had forgotten.

In addition to his brother's clothing, he finds an armband, which he removes. It contains four pictures with Arabic names. These men were the last targets his brother had chased. These were the men who had killed his brother.

Going through his brother's "leftovers" has made him late for a meeting with a firm named Blaisdell consulting, where he is to get an award for his actions on a target in Dubrovnick, Croatia. Blaisdell Consulting is anything but a consulting firm, and Guy is a member of "The Task Force", which is commanded by Col. Kurt Hale.

What the meeting is really about is a mission to eliminate a national threat. That mission is to eliminate the men who killed Guy's brother.

It is called a "James Bond" mission, and is headed by Pike Logan and his team, Jennifer and "Knuckles". And the also perform other missions for "The Task Force".

Were it not for detrimental factors, such as extended descriptions of mundane events and activities, and the persistent use of first and last names and titles, this novel would have been an excellent read. Since the detrimental factors do not disrupt the reading greatly, it is still very good.
Read more
4 people found this helpful
Helpful
Report abuse

Andrew C
4.0 out of 5 stars A Solid Read
Reviewed in the United States 🇺🇸 on November 30, 2021
Verified Purchase
Pike Logan and his crew are likable with intriguing supporting characters. The villains are a little bland in this book, but Taylor writes an interesting but at times, tragic tale. This series continues to impress though.
Read more
Helpful
Report abuse
See all reviews

Dr. Tim Parker
5.0 out of 5 stars A very enjoyable read, and highly recommended.
Reviewed in Canada 🇨🇦 on February 1, 2016
Verified Purchase
This is Taylor's eighth book, I believe, and he gets better and better as time goes by. Comparing this latest novel with his first two, it's interesting to see how his style has evolved and matured. There's no indication at all in this latest book about how "new" he is; this is finely written, well-crafted, and as enjoyable as any of my favorite authors who have been writing for decades.

As for this latest book, it's probably the best in the series. The plot is interesting from the start, with lots of interweaving elements, lots of cliff-hangers, and nice character development. He continues to evolve the story of the Taskforce, and it's on-going issue of balancing between law and what's necessary, as well as exploring that balancing act for individuals in the book. There's solid location descriptions, as well as useful current information. Throughout it all, I enjoyed every chapter, often reading on beyond what I had planned to see how things worked out.

Very enjoyable read, and highly recommended. Whether you're someone who has read previous books, or looking for a place to find out if you're interested in this series, this is the best to come from Brad Taylor to date.
Read more
Report abuse

Andy
3.0 out of 5 stars Ok
Reviewed in Canada 🇨🇦 on January 22, 2018
Verified Purchase
Not one of his better books just ok
Read more
Report abuse