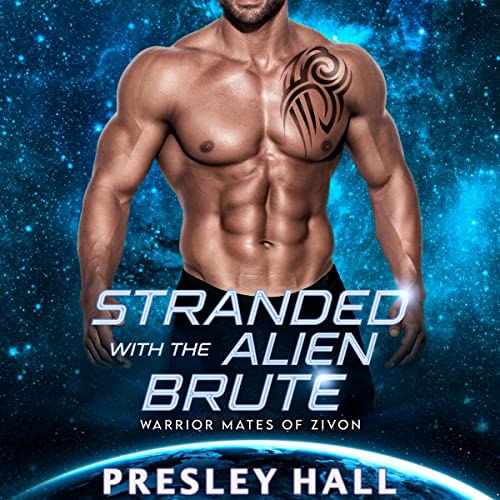 Stranded with the Alien Brute: Warrior Mates of Zivon, Book 7

I’m stranded in space with the grouchiest alien in the universe.

After being held captive by the Kruul for weeks, it’s a relief to finally be free. Or…mostly free.

Instead of being locked up in a holding cell, I’m now stuck on a broken spaceship with a sexy silver fox who seems to hate me.

Although it’s clear that Anzir intends to complete his rescue mission and keep me safe, I can tell he’s not happy about it. We get under each other’s skin, and I’m not sure why. Maybe it’s because he’s older than me, or because I’m an optimist and he’s the grouchiest, most stoic man I’ve ever met.

But the truth is, if we want to have a chance of making it back to The Oasis, we’ll need to work together.

And the more we learn to rely on one another, the more I start to realize....

This gruff alien brute might just have a heart after all.

Stranded with the Alien Brute is a full-length stand-alone sci-fi romance featuring a grumpy hero who's set in his ways and the sweet, spunky woman who wins him over.

If you like sexy aliens, sweeping adventure, and steamy romance, you’ll love this series. No cheating, no cliff-hanger, and a happily ever after guaranteed!

Note: Each book in the series can be enjoyed as a stand-alone, but for maximum enjoyment, it’s recommended that the series be listened to in order.

Your audiobook is waiting!
Learn more about membership
List Price: $19.95
You Save: $2.49 (12%)
By completing your purchase, you agree to Audible’s Conditions Of Use
Sold and delivered by Audible, an Amazon company
Share

Amazon Customer
5.0 out of 5 stars Amazing
Reviewed in the United States 🇺🇸 on November 27, 2022
Verified Purchase
Great story and plot. Loved how fun it was to read and look forward to more! I'm excited for the series to continue.
Read more
Helpful
Report abuse

Kindle Customer
4.0 out of 5 stars Good read
Reviewed in the United States 🇺🇸 on October 18, 2022
Verified Purchase
I enjoyed reading this book 📚
SPOILER ALERT
I thought Maya's rescue on the docks was too quick, but I didn't realize how much work it was going take to get off planet. After that I thought the story was well balanced. Now the Zivonians have an extra spaceship.
Read more
Helpful
Report abuse

lala
5.0 out of 5 stars Stranded with the Alien
Reviewed in the United States 🇺🇸 on September 6, 2022
Verified Purchase
Maya and Anzir. This book is the ending to a situation that started in Book 6. Anzir is an older alien who volunteered to go with Siro to rescue his mates sister from the cruel aliens who had threatened Maya, his mate Darcy’s sister. Darcy was told to disable the Oasis, the “ship” that belongs to the Zivonians ,and she was given the tools to do it all under the threat that her sister would be killed if she didn’t. But, she fell in love with Siro and the other people on board and couldn’t go through with it. Instead, a plan was developed to rescue Maya. This is where the action begins and there is plenty of it! The storyline is good and the characters were excellent. A strong, skilled warrior and a young earth woman who wouldn’t give up. I recommend you read the previous books to get a handle on the story thus far. But, that is very easy to do. The books are all interesting. There are sexual scenes that may offend some readers. Otherwise, ENJOY!
Read more
One person found this helpful
Helpful
Report abuse

Kara
4.0 out of 5 stars Really liked it!
Reviewed in the United States 🇺🇸 on September 8, 2022
Verified Purchase
My rating system:
5 stars - Absolutely loved it! I would definitely read again anytime!
4 stars - Really liked it! Will most likely read again sometime.
3 stars - Liked it. Glad I read it but probably won't read again.
2 stars - Didn't like it. Glad I'm done with the book and I'll never read it again.
1 star - Very rare rating. Absolutely hated the book. Will never read again and I'll probably burn any copies I come across.

Every time I think Presley will run out of new characters and plots, I get pleasantly surprised again!
Read more
Helpful
Report abuse

penny wright
4.0 out of 5 stars Hot, Sweet, Passion!
Reviewed in the United States 🇺🇸 on September 19, 2022
Verified Purchase
Stranded with the Alien Brute is a solid read. I was impressed with the story. Despite Maya being only nineteen, Presley Hall does an admirable job of portraying her as a resilient, quick witted partner. And, who can resist the grouchy older hero, Anzir.
Read more
Helpful
Report abuse

Kindle Customer
4.0 out of 5 stars Good read
Reviewed in the United States 🇺🇸 on September 12, 2022
Verified Purchase
Maya is bored. Yes she is on a stolen spaceship that is not working. Anzir is trying to get the thing working but it's not looking good. What a trip! Enjoy
Read more
Helpful
Report abuse

Kindle Customer
5.0 out of 5 stars Loved It
Reviewed in the United States 🇺🇸 on October 6, 2022
Verified Purchase
Kudos to the author, one of my favorite in the Sci-fi genre. Maya and Ansir have become separated from her sister and her mate. How do they make it back to the mother ship?
Read more
Helpful
Report abuse

Kindle Customer
5.0 out of 5 stars Great series
Reviewed in the United States 🇺🇸 on September 30, 2022
Verified Purchase
I love it. This book is so much adventure, just like the others. I really do love these books. I wish there were more.
Read more
Helpful
Report abuse
See all reviews