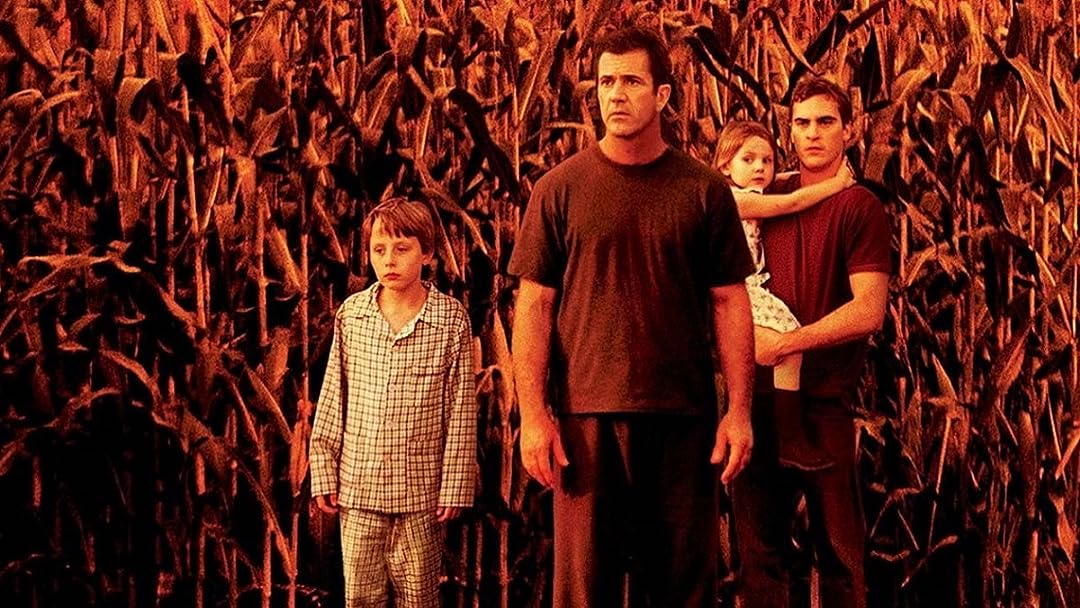 (10,554)6.71 h 46 min2002X-RayPG-13
HD. Mel Gibson plays a former minister who must lead his family against a terrifying supernatural threat in this hit thriller.

Films4LifeReviewed in the United States on June 19, 2016
5.0 out of 5 stars
One of the best Psychological and Sci fi thrillers ever made
Verified purchase
Signs is an absolute masterpiece that reminds us what an excellent director M. Night Shyamalan was and can be. It completely relies on atmosphere, mood, excellent performances and psychology. It has almost no special effects or Alien invasion action scenes and its all the better for it. Its a very effective, expertly made thriller with some terrifically creepy moments and a creepy tone
throughout. Mel Gibson and Joaquin Phoenix give 2 of their best performances here and thats saying a lot! Signs is criminally underrated.
112 people found this helpful
Report abuse

Charles HandReviewed in the United States on April 14, 2019
5.0 out of 5 stars
M. Night Shyamalan understands the absurdaty of shakey-cam
Verified purchase
This film was made in the middle of the shakey-cam epidemic, when even otherwise mature film makes would try to find a scene or two contrived to make an excuse for waggling the camera all over the place. In this film, every shot, every frame, and every camera movement is rock-solid (even the hand-held shots), designed to make a pleasing composition where we can watch the story unfold, and to allow us, the viewer, to wander our gaze over the frame and inspect the details without being jarred out of the story by a waggling camera. Through steady frames, we are riveted to the story as it unfolds. We're bound to the characters, and we love the love we see between them. As in a rare hand full of films (I'd compare this film to Vertigo in its story-telling power), at the end of Signs I feel as if I have not been told a story, or heard a story, or seen a story. I feel that I have lived a story deeply.
37 people found this helpful
Report abuse

joel wingReviewed in the United States on May 21, 2020
4.0 out of 5 stars
It's a question of faith are there miracles or is everything just plain luck?
Verified purchase
Signs was a science fiction movie written, directed and produced by M. Night Shyamalan. It focuses upon the family of former priest Graham Hess (Mel Gibson), his brother Merrill (Joaquin Phoenix), and his two children Morgan (Rory Culkin) and Bo (Abigail Breslin). Graham is dealing with the loss of his wife who died in a car accident while also finding crop circles on his farm made by aliens. Unlike Shyamalan’s other creations there’s no twist at the end.

The movie does a good job building up tension. At the start, Graham and Merrill find crop circles in their field. Then aliens start showing up at their house, but the two brothers think they’re vandals and chase them around. Then news stories start to spread about crop circles being discovered around the world.

At the same time Graham is constantly dealing with the aftermath of his wife’s death. He quit being a priest as a result because he lost his faith and yet people still call him Father and want to confess to him. He relates that to when the aliens show up. As he tells his brother Merrill there are two types of people. One thinks when something good happens to them it’s because there is a higher being looking out for them. The others think it’s just pure luck. Did that mean the aliens showing up was a miracle or just pure luck? For Graham that relates to the death of his wife because if there was a God she should have never died thus life is just random events. Both events were a question of faith and how people explain their lives.

I have been up and down over Shyamalan’s films. Sometimes it seems like he’s trapped in his own celebrity and just writes scripts to have twists at the end, because that’s what made him famous. Others seem like more nuanced and thought out stories. Signs was the latter and proved to be a really good sci-fi flick.

Merch MavenReviewed in the United States on December 23, 2017
5.0 out of 5 stars
Tin foil hats never looked so good.
Verified purchase
Love this movie, totally family friendly, and while their are aliens in this, the movie isn't about that, it's about predeterminism and redemption. The themes are beautifully unfolded and the love of this family is inspiring. The Aliens may be scary for smaller children, children in peril etc. I can re-watch this movie anytime. If you family wants to watch an "alien movie" this is the one, it sparks some great conversation, and there are lines worthy of quoting...
38 people found this helpful
Report abuse

Bare BonesReviewed in the United States on May 7, 2019
4.0 out of 5 stars
THE BARE BONES REVIEW
Verified purchase
This product arrived quickly Via Amazon prime.

The video quality for this Blu-ray ranges from good to excellent. There were many instances where fine detail was extremely noticeable, and portions of the film where it was noticeably reduced. Why this is, I'm not sure. However, fine detail seems to drop off slightly as the movie progresses. I noticed no issues with the audio quality. Both the dialogue and musical score were well blended and never overtook one another. The acting in this film is excellent, especially the performance from Gibson and Phoenix.

This is one of M. Nights earlier films, and it shows. The writing here is just exquisite. It really sells you on the idea that this grand and frightening thing is actually happening, and lets you experience it on a familiar level. These are regular people, in a regular home, who are (at the same time) recovering from a tragic loss. The characters are struggling with issues of faith, and an inability to move forward. Some are still trying to find their place in the world. It's a multilevel experience.

When it comes to covering alien invasion scenarios, this film is top-tier. The musical score here is just powerful, the cast just delivers, and it's all just handled and formed so well. It's a beautiful and entertaining film, and a solid value on Blu-ray.

I encountered no issues playing this Blu-ray on my 2017 model LG Blu-ray player. No update was required for my machine to play this disc.
16 people found this helpful
Report abuse

HonestreviewReviewed in the United States on January 5, 2021
2.0 out of 5 stars
Great acting, terrible movie
Verified purchase
With two of Hollywood's best actors, I was surprised they choose a movie with such a bad script. The movie has 0 common sense or scientific knowledge. Purely written by someone he seems to have done 0 research about anything, unlike most movies where you will get to hear some jargon from the actual field of expertise.

Imagine if a 16 year old minecraft player wrote a military movie, but used his 16 year old minecraft vocabulary. That's how I felt watching this movie. A reverend who used no dialogue from a Bible, a baseball player who knew nothing about baseball, and a cop who knew nothing about policing. That is what you get watching this movie.

My biggest takeaway from the movie was, why did these actors chose to do this? Maybe they owned someone in Hollywood a favor?
12 people found this helpful
Report abuse

Garden Doug Reviewed in the United States on August 18, 2020
1.0 out of 5 stars
Only slightly entertaining
Verified purchase
Sure isn’t a 4.7star movie!!! Substandard acting ~ low budget or non existent special effects ~ I sometimes wonder how many stars ⭐️ a test pattern would rate in Amazon’s ratings scale
13 people found this helpful
Report abuse

AnonymousManReviewed in the United States on July 28, 2019
2.0 out of 5 stars
Not As Good As I Remembered
Verified purchase
Rented the film as a throw-back to when I first watched it as a kid. I just didn't realize how much misplaced dialogue and disconnected responses there are in this movie. Aliens are out to wipe out the entire human population, and you have main characters staring off into space, a widowed dad chatting about the good-old days, and an insensitive little s*** of a kid who does nothing but sit back and spout off "alien" non-sense while the adults run around actually trying to survive (though Merrill seems to take the cake with being more proactive about not dying). I could maybe empathize with the case of the father, but there should really be a limit to the drama so as to not distract from the fact that the family is about to be obliterated by beings that shattered their reality. Drama seems to take top priority and results in characters being too detached with their situation. I don't really mind rewatching the film, but I honestly would not watch it again.
15 people found this helpful
Report abuse
See all reviews
Back to top
Get to Know Us
Make Money with Us
Amazon Payment Products
Let Us Help You
EnglishChoose a language for shopping. United StatesChoose a country/region for shopping.
© 1996-2021, Amazon.com, Inc. or its affiliates