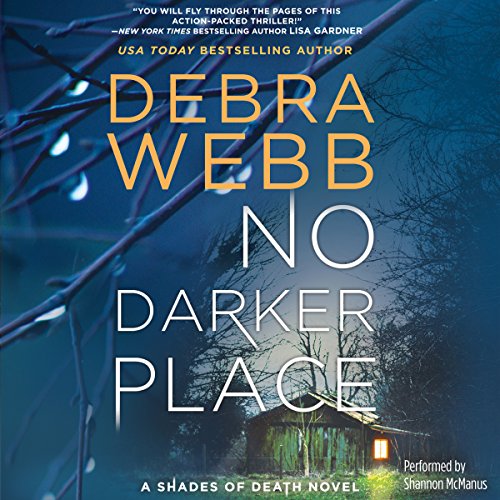 No Darker Place: A Thriller (Shades of Death, Book 1)

They want revenge. They need each other.

Detective Bobbie Gentry has one objective: to stop the serial killer who robbed her of her husband, her child, and her life. Nick Shade understands Bobbie's pain - and her desire for vengeance. He's on a mission of his own, and the murderer known as the Storyteller is next on his list. Nick knows that the best way to find his target is to stick close to Bobbie. But as she becomes more and more reckless in her attempts to lure the Storyteller out of hiding, he has to make a choice. Will he protect her from herself even if it means passing up the chance to take out one more monster? As for Bobbie, she's forced to decide just how much she can trust this stranger who knows so much about her. And both of them are about to learn whether or not two broken people can save each other.

Amazon Customer
5.0 out of 5 stars Breathtaking, heart pumping, dark thriller !!
Reviewed in the United States on February 28, 2017
This is one of Debra Webb's best thrillers yet ! Detective Bobbie Gentry had been held captive by the Storyteller for weeks after he murdered her husband. She had been tortured and raped in ways that were unimaginable . She managed to escape and now she out for revenge. She knows the Storyteller is not finished with her !!!! This book is the second book in the Shades of Death series . If you are looking for dark suspense you need to read this book ! Debra Webb holds nothing back .Bobbie has teamed up with Nick Shade a serial killer hunter . He has a hidden past and has been watching Bobbie . He has put the Storyteller at the top of his list . This book will keep you on the edge of your seat from start to finish . Once you start this book you will not want to put it down ..A must read !!!
Images in this review

Penny Evenson
4.0 out of 5 stars Good book
Reviewed in the United States 🇺🇸 on April 25, 2022
Verified Purchase
Good book! Little too grafic for me but good plot. Bonnie has a lot of issues to deal with - interesting how she deals with them!
Read more
Helpful
Report abuse

jwreinhold
5.0 out of 5 stars A five star book if there ever was one!
Reviewed in the United States 🇺🇸 on February 28, 2017
Verified Purchase
5 Stars's for Debra Webb's "No Darker Place", a true thrill ride from start to finish!
This book is a dark,suspenseful, physiological thriller that will keep you on the edge of your seat and peeking into the dark corners of your room as you are reading it.
Once I started this book, I couldn't put it down. A fast paced story that will have you flipping the pages well into the night.
Detective Bobbie Gentry has been though hell, her life destroyed at the hands of a serial killer, The Storyteller. Now, the only thing that keeps her putting one foot in front of the other each day is the driving need for revenge.
This book has a dark intensity. As the clock ticks, more lives are in danger from this mad man. His single minded determination to have Bobby back, to recapture the one that got away, drives him into a new level of depravity. Bobby decides that the only way to stop him, to end it once and for all, is to give him what he wants, herself. One of them will die and Bobbie is determined it will be him by her hand alone.
Nick Shade, a self designated hunter of serial killers has a dark hidden past of his own. He is a shadow, constantly moving and never getting close to anyone. He has been watching Bobbie and now has put The Storyteller at the top of his list. Will he be able to save Bobbie from herself and end The Storyteller's reign of terror?
This book will take your breath away and have your heart pumping, and at the end it will leave you ready for more!

Kindle Customer Linda Lettau
5.0 out of 5 stars A page turnrr:
Reviewed in the United States 🇺🇸 on June 2, 2022
Verified Purchase
I rated this book a five Star. I was on the edge of my seat. So intense sometimes I thought that I couldn't finish this book. But I did and have no regrets. I will recommend this book to my closest friends and family. Only the one's that would like to read this type of exciting book.
Read more
Helpful
Report abuse

Melody-Rose Parker
5.0 out of 5 stars Fast Paced Suspense in No Darker Place
Reviewed in the United States 🇺🇸 on March 1, 2017
Verified Purchase
I read an ARC of No Darker Place, and this is my honest review.

Talk about a fast-paced suspense thriller - I picked this book up about 9:00 a.m., couldn't put it down, and was finished by 11:00 a.m. I just had to know if Detective Bobby Gentry was going to finally come to some sort of resolution with the Storyteller, a serial killer that she had escaped from previously.

The character development in this book is extraordinary. Bobby Gentry and Nick Shade, the hunter of serial killers who helps Bobby in the cat and mouse game the Storyteller maneuvers them through, feel real to me. I care about Bobby, and at times wish she cared more about living. Nick has his own demons to fight, and I wanted to see him win. I liked this relationship a lot because Bobby and Nick both moved more into life together and hope that Bobby and Nick pair up in future books.

The Storyteller is a great villain! He's perverse, intelligent, leaves no evidence behind. He didn't kill Bobby Gentry the first time she encountered him and wants to finish her story. Will Bobby's story end? You won't find out until the very end of this novel.

As always, Debra Webb does a masterful job of creating fully developed characters that readers care about while she weaves a masterful plot that is filled with suspense and action. I can't wait for Debra's next Shades of Death novel! (less)
Read more
2 people found this helpful
Helpful
Report abuse

Boston Bob
5.0 out of 5 stars I Couldn't Put This Book Down.
Reviewed in the United States 🇺🇸 on February 28, 2017
Verified Purchase
“No Darker Place” by Debra Webb is an astonishing psychological thriller set in Montgomery, Alabama. The Storyteller, a heinous serial killer, has unfinished business with Detective Bobbie Gentry, who is the only survivor to escape his grasp. In truth, they are both hunting each other hell bent for payback and finality.
Bobbie has help this time from Nick Shade, a serial killer hunter from parts unknown. He has come to her in a dream during her rehab from capture. Together they plan the demise of Gaylon Perry, the Storyteller.
There will be no forthcoming trial in either of their minds, justice will be theirs and theirs’ alone. Bobbie’s and Nick’s immersion into this hunt will change their lives forever. Will Bobbie avenge the killing of her husband and child?
The chase and conclusion of this book will keep you engrossed as the pages fly by. You will not be able to set this book aside.
This book is the second in Webb’s “Shades of Death” series. The prequel is entitled “The Blackest Crimson”, a quick read that will set the stage for this saga. Reading this first, will whet your appetite for what is to come. It’s only $1.99, so do yourself a favor and read it first.
I can’t wait for the next novel in this series, “A Deeper Grave” being released on May 30,2017.
As always, good reading to you all from fellow reader, Boston Bob.
Read more
12 people found this helpful
Helpful
Report abuse

Robin
4.0 out of 5 stars Suspenseful and engrossing
Reviewed in the United States 🇺🇸 on October 15, 2020
Verified Purchase
4.25/5⭐️

Another series for me by this author, and so far I’m loving it more than the previous one I’ve read (The Undertaker’s Daughter). A lot darker (trigger warning: rape, torture), but also a suspenseful story and characters to root for.

Bobbie, a cop, is the only survivor of serial killer The Storyteller. He took her family and tortured her and has come back for the one who got away. Nick “hunts” serial killers and has shown up to do his job.

I’m in for the ride.
Read more
Helpful
Report abuse

spk47
5.0 out of 5 stars Great read - well done
Reviewed in the United States 🇺🇸 on March 1, 2017
Verified Purchase
Debra Webb takes you to the dark side - that side we don't want to acknowledge, the one we pretend doesn't exist in all of us, and she asks the tough questions.

What would you do to avenge the death of your loved ones?

Is there a limit to how far you would go?

Where do you draw the line?

I love Mrs. Webb's work, and when I read the prequel "The Blackest Crimson", and saw that it takes place in Montgomery, Alabama - a place I am familiar with - I couldn't wait for the release of this book.

A word of warning here - don't start it unless you plan on abandoning any hope of getting anything accomplished except reading this book. Also the next book in the series won't be released until MAY 30th. (I read fast, so now what am I suppose to do?)

Too bad there isn't a 6 star review.
Read more
One person found this helpful
Helpful
Report abuse
See all reviews

cindy
5.0 out of 5 stars Great read
Reviewed in the United Kingdom 🇬🇧 on May 23, 2021
Verified Purchase
Good read and plot. Well written and keeps you reading till late s night. You do feel the characters like you know them.
Read more
Report abuse