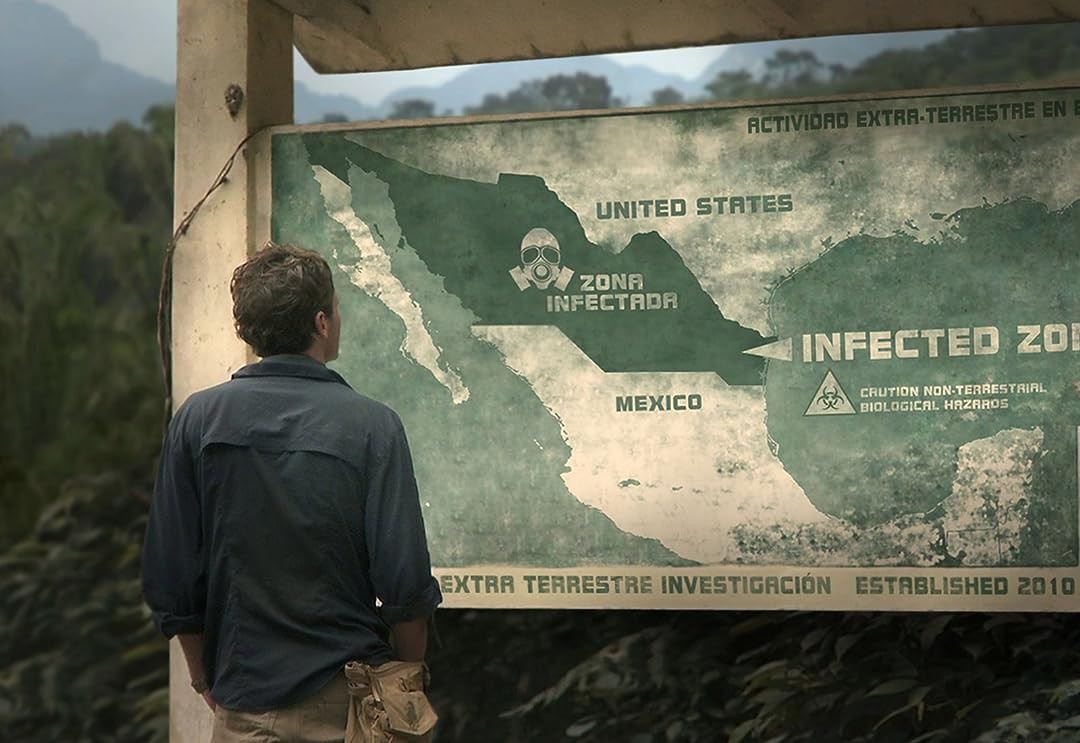 L. G. VernonReviewed in the United States on March 16, 2021
1.0 out of 5 stars
Like Watching Ugly Paint Dry
Verified purchase
You know that warm, fuzzy feeling you get over a pleasant surprise, or even that rush of adrenaline when something startles you? Well, if you're looking to be pleasantly surprised by a sleeper movie, or startled on any level by decent scifi, you ain't gonna find that here. Not only did I bet on the come line that this flick might be worth a look, and paid 6.99 for what proved to be an irredeemable waste of pixels, there's also those two hours of my life I'm never going to get back. The only reason my husband and I put ourselves through the torture of watching this entire thing was our fervent hope that the two stars would be captured, tortured, and eaten, toes first, by the aliens. Or even bombed and gassed by the military. Strangled by dangling vines...swarmed by fire ants...attacked by carnivorous plants...

Anyway, if you want to spend two hours watching a pair of self-absorbed morons bumble their way through what passes for a plot here, then this thing is for you.

Be prepared to be underwhemed.

And don't say I didn't warn you.

Gary M GibbsReviewed in the United States on April 10, 2019
1.0 out of 5 stars
We are the real monsters, don't you get it? Yawn.
Verified purchase
If you're up for a very predictable love story mixed with a "lesson" taken from the standard pet talking point of a vacuous university sophomore leftist, then this is for you. Oh, and there is an occasional appearance by some giant light up space squids that although deadly, do like to cuddle.
118 people found this helpful

Kindle CustomerReviewed in the United States on October 24, 2020
1.0 out of 5 stars
Another "human nature" movie with very little else.
Verified purchase
Not enough monster action to be a good monster movie, felt the political drops were a little heavy handed and I had no interest in the characters. The lead woman falls in love with the lead man over what seems like a few days after he got drunk and flirted with her, struck out and slept with another woman, messed up in a way that led to having to take a more dangerous route (and costing a lot more money), seemingly choosing to take pictures at what may be dangerous times while he's supposed to be protecting her. Also a lot of the people seem to take stupid actions for people that are afraid the monsters are going to come get them.
59 people found this helpful

Gamer GuyReviewed in the United States on March 23, 2019
1.0 out of 5 stars
Slow political garbage. Just avoid this movie.
Verified purchase
Half the movie is spent/wasted on some unlikable characters trying to get back home to the USA. She is a rich brat and he is a poor photojournalist that 'must' take pictures of carnage. The innuendo in this film is blatant and unabashed. Shameless political garbage with no redeeming qualities.
63 people found this helpful

SilverLiningReviewed in the United States on June 21, 2021
1.0 out of 5 stars
Bait and Switch Garbage With a Seriously Stupid Plot and a $20k Budget
Verified purchase
Let me cut to the chase: I would easily classify this as one of the 5 worst movies I have watched in the past 50 years.

I was truly suffering through the meaningless, s-l-o-o-o-o-o-w-w-w plot, timing how long it would take for some "action" to begin: 1 hr and 13 mins. If you consider three 2-seconds scenes shot at night in a dark jungle of a squid passing across a hardly visible road, howling like a goat in heat, "action". Then it was back to sheer vacuous, meaningless stupidity and a waste of time repeating the same shots, dialogue and scenes time-after-time-after-time. Then, lo and behold, when there were 3 minutes left (Yes!, 3 minutes left), they show a pair of giant octopus/spider-like creatures dancing on top of a service station, really. Although the actors were just few from them, staring with starry-eye and the 2 monsters supposedly mating, they did not try to hide or run and the monsters ignored them completely. The monsters then faded into the night and THAT'S THE END! Are you kidding me?

Love story?: Gimme a break! She falls during the last 10 seconds for a guy that managed during the 2 days they have been thrown together, to lose her passport to a prostitute that surely gave him some incurable VD after a meaningless sex encounter during a drunk stupor, caused them not be able to take the ferry, have her give her $20,000 wedding ring to ride for a bit on the back of a disgusting truck? A guy who was an utter failure as a failure to a child he did not know he had for years because of another meaningless rump with some chick? I could go on, but trust me: THIS IS NOT WORTH ONE SECOND OF YOUR TIME. Garbage, garbage, garbage.
19 people found this helpful

Carl T. Doran IIReviewed in the United States on June 14, 2021
1.0 out of 5 stars
Monster is a metaphor
Verified purchase
The Monster is to show how had life is in Mexico, Central and South America.
And the massive wall in the move is the Wall or Barrier that America (USA) has been building for over 40 years as I remember President Bill Clinton was building a wall/ barrier along the US and Mexican border, a physical wall or just a heavily patrolled area. The Left is acting like this is new since President Trump but its not. Very slow moving political agenda movie.
I think the USA was too nice after the Spanish American War
21 people found this helpful

MikeReviewed in the United States on October 1, 2020
4.0 out of 5 stars
Budding Love Under the Monsters
Verified purchase
This is a good movie. It may not satisfy those looking for non-stop destructive action or people being eaten alive, but the story was different, the characters reasonably developed and given backgrounds, and was very well shot. The script was believable (what there was of it) and the acting was more professional than most of this genre. The main objection is the screwed up geography for which at least a star needs to be deducted. Pyramids where there are no pyramids, screen location title where the actual action was not taking place, and a trek through the danger area that was described as way shorter than the map expanse showed. Given the thought that went to the concept, script, and visuals, not a major problem.
12 people found this helpful

johnfReviewed in the United States on November 5, 2016
4.0 out of 5 stars
A good character drama in a monster-inhabited setting. Not an action film.
Verified purchase
Monsters is yet another audience-dividing film in the Sci-fi genre, one that also occurs in horror. Both genres attract action fans and when they turn out to not be full of acti so it's no wonder some people don't like it. on that segment of the audience rebels. These people here are calling the film boring, which indeed it would be for someone expecting a big monster-on-the-loose stomping cities film. Often this is the fault of the promotion department. There are many examples of films hyped in the posters, ads and trailers and even the DVD covers as big action films when really, they're not. The studio just wants to sell tickets and that's an easy way to get people to do so. It's wrong to do that to an audience but it's done because it's easier to promote a film with a couple action clips than to get it across as a character-driven drama.

And that's exactly what this is, an indie drama about two strangers coming together to survive in a tense and unpredictable situation. It's more of a gradually growing romance than a horror story so it's no wonder some people don't like it. In fact it's really well done with the two principals acting very natural throughout their adventure-ordeal. Some viewers don't like the characters, considering them rich and spoiled, but that's another thing entirely and not valid film criticism. There is a plot contrivance that sets everything that follows into motion that makes a character do a particularly stupid and juvenile thing and that's a bit annoying, but without it you'd have no film, so you have to let it pass.

In fact you have to let a lot of plot holes and unbelievable things slide in order to enjoy the film but I found the film so compelling and enjoyable that I was willing to do so. The monsters themselves when they do appear onscreen, look really good but the exobiology is impossible. Even if such huge creatures could inhabit the sea under the ice of Europa (their source in the film) could they take the much hotter climate of Earth? And being confined to underwater life how is it that they can walk on land at all, much less withstand Earth's much heavier gravity? It's things like that that can bug you, but like I said, the human drama is good, so you let it pass. Whitney Able as Samantha Wynden also manages to stay awfully clean and good-looking despite this horrible trek through the jungle, but that's pretty standard in films.

This movie looks really great for its half-million dollar budget and the fact it was shot with consumer-level video. The scenes were mostly shot on location (in Mexico and Guatemala) using whatever locals were around as characters and extras, almost extemporaneously. Only the two principals are experienced actors. The special effects were amazingly all created on home computers using special effects software available to the general public. This is hard to believe when you see it. Had director-writer Gareth Edwards wanted to make an action film of Monsters, he could have done so. Monsters - that was probably the worst name they could have come up with for this film as it really does infer a creature-centered film.

If an independent film drama in a near-future science fiction setting appeals to you by all means see this film. It's unique and different

EXTRA NOTE ON CRAZY GEOGRAPHY: As much as I liked this film, I couldn't get over the director's total misconception of Mexican geography. The "Infected Zone" shown on maps several times is clearly the Northern third of Mexico up to the U.S. border. The characters seem to be shown on the map (when they plan their route) near the west coast around the latitude of Acapulco. Yet the whole trek takes place in the jungle. In fact at one point they are looking at the U.S. border (clearly marked by a huge wall - LOL) from the top of a Mayan pyramid surrounded by jungle. All I can imagine is that the British director, who shot everything near and in Central America, simply thought it was the same all the way through Mexico. It would have been a very simple thing to simply write it taking place in Guatemala or the Yucatan. As it is it's weird and a bit distracting.
37 people found this helpful
See all reviews
Back to top
Get to Know Us
Make Money with Us
Amazon Payment Products
Let Us Help You
EnglishChoose a language for shopping. United StatesChoose a country/region for shopping.
© 1996-2021, Amazon.com, Inc. or its affiliates