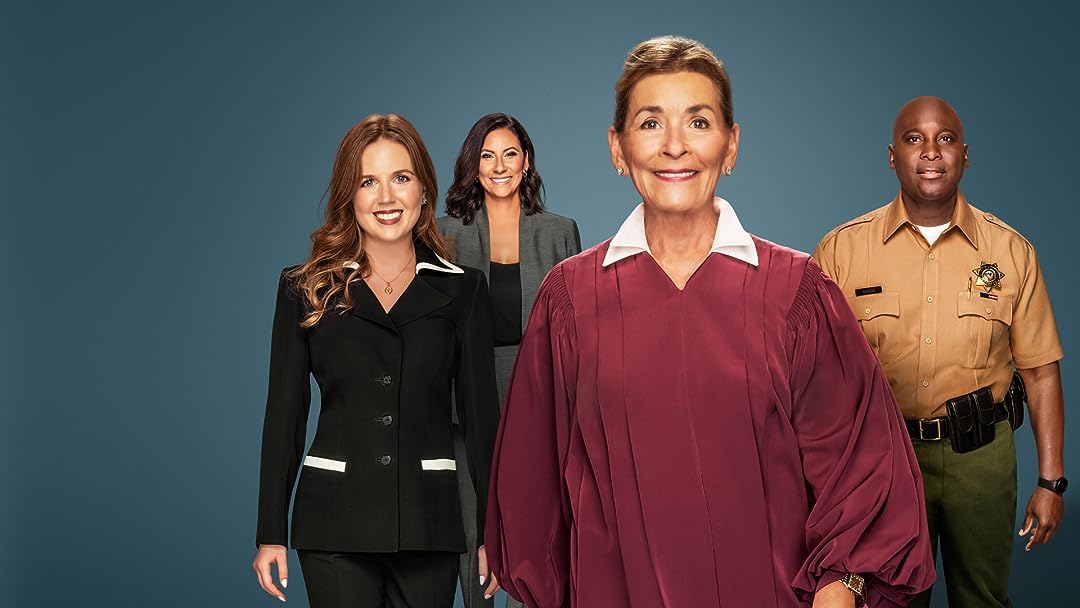 Season 1
(694)
7.12022X-RayTV-14
EMMY® AWARD WINNER - The Honorable Judy Sheindlin, retired Judge of the Manhattan Family Court, brings her signature blend of sharp wit and wisdom, hilarious candor and unwavering honesty that has made her America’s favorite judge for over 25 years, as she presides over real cases, arbitrates binding decisions and delivers what only she can: “Judy Justice."

Playing the video isn't supported on this device/operating system version. Please update or watch on Kindle Fire, mobile devices, game consoles, or other compatible devices.
Add to
Watchlist
By ordering or viewing, you agree to our Terms. Sold by Amazon.com Services LLC.
Write review

Quentin ByersReviewed in the United States on September 2, 2022
4.0 out of 5 stars
No many sneak peeks and reviews
I love Judy and have watched her TV show for years. But this new form on Amazon, they don't need the sneak peeks and reviews. ( I'm assuming Amazon published this show. I couldn't find information saying otherwise.) Anyways, take those out and I'm happy. She's is as she always has been. But the commercials are short.. thank you!.... no need need for those extra videos that make me get board and not want to watch cuz I already know what's gonna happen next.
One person found this helpful

JesseReviewed in the United States on June 3, 2022
4.0 out of 5 stars
Fans of Judge Judy Will Be Pleased
As someone who has been watching Judge Judy (casually and on and off) since I was a child in the early 2000s, the thought of her starting fresh with a new show was scary to me. I didn't want the format that was so comfortingly entertaining to change, but after watching the new show, I was very pleased to see that, among some negative changes, there are some really great positive ones, too.

Let's start with what doesn't work. First and foremost, the laugh track. Judge Judy does NOT, nor has she ever, needed a laugh track. It sounds artificial and takes away from the show. We as viewers understand when a moment is funny. We don't need you to add the same repeated artificial laughter to remind us to laugh.

Secondly, the elephant in the room. Byrd is absent, and in his place is a baliff who, no shame towards Kevin, doesn't have the same chemistry with the Judge as Byrd did, and doesn't have the same strength that scared so many of the half-wits that have come on the show. The drama surrounding what happened can be felt when you first start watching this new series, but that quickly fades. It was wrong of her AND the production staff to leave Byrd behind, or at the very least not even ASK if he'd be interested in being part of the new show, and that was a serious mistake on their part. But, it doesn't make the show not worth watching.

Thirdly, the addition of the two sitting on either side of Judge Judy. I have felt that her granddaughter serving as the law clerk has been of help in certain episodes, researching things and providing greater context that was perhaps missing from the original series. But when has the Judge ever needed a stenographer? One wonders if she's in a place where she needs help with her memory, or if the producers just thought adding a stenographer would help set the scene of a real courtroom and add to the validity of the show. Eitherway, it's not needed, and the frequent camera cuts showing their reactions aren't needed.

Now, what does this show get right? Just about everything. Judge Judy still has the same veracity she always had, and if you just focus on watching her interaction with the plaintiffs and defendants, you would think the show had never changed. I also love that they've raised the award limit of the court to (seemingly) $10,000 from what it used to be, $5000, because you get deeper cases that feel like true battles. The producers have also done a wonderful job in selecting really interesting cases, mostly, in this series, where the person greatly needs (and deserves) some serious humiliation from the Judge. The smackdowns Judge Judy gives in this series have been amped up to 10, and it's so fun to watch!

Overall, if you loved Judge Judy and need your fix, this is exactly where you're going to find it. They've done a great job in making the Judge comfortable, and bringing cases where she can really bring the hammer down on people who deserve it. The addition at the end where she talks with her granddaughter about what to learn from the case is also great! Thank you for continuing Judge Judy's fantastic legacy!
3 people found this helpful

Debby GrahamReviewed in the United States on August 2, 2022
4.0 out of 5 stars
Why did she end Judge Judy? This is the same show with a different cast of characters.
I love Judy Judy although she gets snarkier each year she ages. But this show is so much the Judge Judy show that I'm confused why she quit one to do this? And then its restricted to Amazon viewers only!

And I too was very upset that Byrd isn't here. He was an integral part of Judge Judy and she leaned on him a lot! This new bailiff doesn't appear to even be a real cop. BRING BACK BYRD!
Well, only the first season on Freevee is free even to Prime members, so I guess that's it for me!

Sheri MReviewed in the United States on July 14, 2022
4.0 out of 5 stars
Relaxed atmosphere
I like to watch the judge, she wants the facts and only the facts. Don't put in no feelings, just the plain story. There are times when she appears to be more harsh than usual, I suppose that is when it's close to lunchtime. However I have learned a little more about the law, and I try to stick with the framework of any story. Judy Justice is a nice way to enhance the purse of her granddaughter Sara Rose. Along with the Court Reporter and Bailiff just not as much.
One person found this helpful

LarissaReviewed in the United States on July 19, 2022
4.0 out of 5 stars
Ep 92
That father daughter set in ep 92? I'm guessing you thought you were coming on tv to show the world how fun and clever you were but wow. It did not go over like that. The daughter looks like the most bitter, backbiting, vindictive landlord and her father looks like an idiotic, juvenile fool. Good job you two. Way to play the fool and lose your case.

Marcus MeikleReviewed in the United States on July 24, 2022
3.0 out of 5 stars
Judy takes adderall?
She must have. Especially before. If not, then she's actually the worste person in the world. Who is she to judge?

Texas WoodworkerReviewed in the United States on May 5, 2022
4.0 out of 5 stars
My honest opinion - Good, could be great with some adjustments
First of all, the people giving it 1 star reviews over #byrd are just stupid and insane. He was a wall ornament and barely said anything. So to think that having Byrd there would make it 5 stars is asinine. Things that i think could improve the show are
1) Put Judy back in a black robe.
2) Put a full audience back in the damn building. Having 3 people in the audience, why? Are we pandering to Covid policy here or what? no one wants to watch a freaking show with an empty audience. This point cant be overstated!
3). Judy's niece needs to WAKE UP. She's dragging down the post case review. She looks scared and has nothing of value to add. She seems uncomfortable to be there and it makes me uncomfortable to watch it. She either needs to grow a personality for TV or be replaced. I'm sorry to whoever you are Ms Rose but this is a business and it needs to make $$$. So, either have something of interest and value to add in a confident and appealing manner or put someone in that spot that can. Think of People's court. The husband is likable and a value add. He seems very comfortable to be there. This woman on Judy Justice doesnt. Seems very sweet, but shes dragging the show down. The court reporter almost seems like she would be more engaging that Ms Rose.
4) Change the courtroom a little. It seems a little off. Not sure why...

Things i like: 1) Judy as always! and 2) The cases have had some depth to them; which is cool. So good job on whoever is selecting the cases. Keep that going!
3 people found this helpful
See all reviews
Back to top
Get to Know Us
Make Money with Us
Amazon Payment Products
Let Us Help You
EnglishChoose a language for shopping. United StatesChoose a country/region for shopping.
© 1996-2022, Amazon.com, Inc. or its affiliates