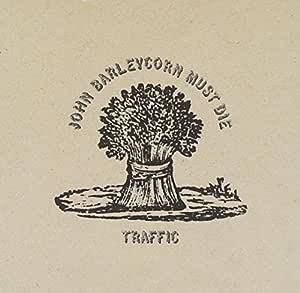 Save with Used - Good
$6.99
FREE Shipping on orders over $25.00 shipped by Amazon.
Arrives: Monday, Jan 25
Ships from: Amazon
Sold by: Prime Goods Outlet

Traffic Format: Audio CD
4.7 out of 5 stars 398 ratings
Amazon's Choice recommends highly rated and well-priced products.
Amazon's Choice for "john barleycorn"
See all 21 formats and editions Hide other formats and editions
Includes FREE MP3 version of this album.&nbspProvided by Amazon Digital Services LLC. Terms and Conditions. Does not apply to gift orders.&nbspComplete your purchase to save the MP3 version to your music library.
Available at a lower price from other sellers that may not offer free Prime shipping.

After his short-lived Blind Faith project, Steve Winwood re-formed Traffic with Wood and Capaldi and released this 1970 classic. But what's really special about this reissue are the unreleased tracks: the songs I Just Want You to Know and Sittin' Here Thinkin' of My Love , and Glad and Who Knows What Tomorrow May Bring recorded live at the Fillmore East in November 1970!

Traffic's third studio album is also its third best, ranking below the band's superb second record (1968's Traffic) and its psychedelic debut (1968's Mr. Fantasy). The depth of those albums came from having two superior songwriters, Steve Winwood and Dave Mason; by John Barleycorn, Winwood was leading a trio that included Chris Wood on horns and Jim Capaldi on drums. Winwood now supplied guitar as well as keyboards, and songs such as "Glad" and "Freedom Rider" reflected the trio's fondness for instrumental jams. But the 1970 album is remembered most for the title tune, a traditional folk song blessed with one of the finest vocals of Winwood's long career. --John Milward

4.7 out of 5 stars
4.7 out of 5
398 global ratings
How are ratings calculated?
To calculate the overall star rating and percentage breakdown by star, we don’t use a simple average. Instead, our system considers things like how recent a review is and if the reviewer bought the item on Amazon. It also analyzes reviews to verify trustworthiness.
Top reviews

Joe Eastlack
5.0 out of 5 stars This Album Is Very Dated But A Good Dated.
Reviewed in the United States on January 10, 2017
Verified Purchase
I wish they could find tracks from 1967 from Traffic and make a Mr. Fantasy Deluxe Editon. I really love that album and the followup album called Traffic. However, this album is first of all great at what it is,back to jazz as usual, secondly it is a very dated album but that is not a bad thing because it came from 1970 and therefor should sound dated as long as it is done well and thirdly they must have been tired of dragging Dave Mason along with them as the only song on this disc that sound closely related to a Mson like sing is John Barleycorn Must Die. It is a great song although it is rather lengthy. The live tracks on disc two are really great and showcase their talents very well. The remixes are pretty good, but the highlight for me are the concert tracks. By the way, it was also sad to hear about Wood and Capaldi, what tragic losses.
Read more
3 people found this helpful
Helpful
Report abuse

Michael Ray Rota
5.0 out of 5 stars Really their best
Reviewed in the United States on July 26, 2020
Verified Purchase
This recording by Traffic to this listener is so forward thinking and refreshing it was nothing like they did before but still along the lines of their basic mindset it was so hybrid in its nature Winwood and Capaldi were so adventurous yet so accessible and Yet Chris Wood might be the glue that held it together it all sounds even better today Glad is such an amazing piece to start an album with it instantly captures you and raises your senses and you can’t wait for what’s next cuts like Empty Pages and Freedom Rider raise the intensity even more the live portion of this deluxe makes you realize how confident they were as a trio I only wish they would have stayed the same later on but all good things come to an end as they say John Barleycorn May die but Traffic is eternal!!!!!!
Read more
Helpful
Report abuse

Gregory E. Dunn
5.0 out of 5 stars Added live tracks make this a "must-have"
Reviewed in the United States on December 14, 2011
Verified Purchase
Frankly, I'm not too excited about most reissue CDs these days. Most labels just take the original recordings, compress them excessively to maximize the apparent loudness, and slap a "REMASTERED!!!" label on the product.

This remaster sounds OK, though it is noticeably louder than the first issue. But the real reason I bought it (and the reason to own it) is the added live show on CD 2. This is essentially an unreleased Traffic concert album according to the liner notes, and it's from an era where the band was not well represented by live tracks. The track list encompasses several of my favorite Traffic compositions, including "Who Knows What Tomorrow May Bring", "Every Mother's Son", "40,000 Headmen", and an excellent performance of the rarely heard "Glad/Freedom Rider". The band was obviously having a good time, and their enthusiasm shows in the way they draw out the songs to slightly extended lengths.

Regardless of the added studio tracks, the live show is worth the cost of the CD by itself. This is a must-have for every true Traffic fan.

Clyde D. Hoops
5.0 out of 5 stars John Barleycorn must live!
Reviewed in the United States on May 4, 2000
Verified Purchase
This is one of the best offerings by the band named Traffic, with the re-mastering of this import version the music is even clearer and more to what one would think the band was trying to get out to the public. The re-mastering here doesn't have the usual harsh tinny/bright sound that has ruined many remastered efforts, not just by this bands but many many others.
Included on this reissue is an extra track not on the original vinyl called "Sittin' here thinkin' of my Love". Also included is a selection of two live songs from the Fillmore East recorded in 1970 after the fall of Blind Faith and Ginger Baker's Air Force which included Rick Grech on bass which actually fills out the sound much better than previous live offerings wherein the band had toured prior with only organ/flute/drums. This gives the listener/fan an oppurtunity to hear the band as a four piece prior to the Low spark/Shoot out ensembles of six to eight members, definently an added pleasure rather than an effort to get more "product" to the buying public.
Overall the time taken to re-master the album, give detailed liner notes and also include the original gatefold sleeve inner picture of the band as a three piece as well as other pics of the period are just fantastic. This version is highly recommended to all Traffic fans and even more so to the newly initiated listeners.

Spud
5.0 out of 5 stars One of the best albums ever? I've been thinking that may be true for some months...
Reviewed in the United Kingdom on February 12, 2015
Verified Purchase
I can't decide if this is their best or perhaps Mr Fantasy... certainly for me, it is one of the two and it could depend on the mood I'm in as the other has some nice psychedelic songs on from Dave Mason. This is really the other side of where they were then (even though it's a 'comeback' album) so it's more straightforward pop/rock with a folky tinge on a couple of songs although it kicks of with the jazz-samba-ish Glad and then into the funkier Freedom Rider. That's about the best segue from one incredible pieces of music to another, that I've ever come across.

I was addicted to this (and Mr Fantasy) for about 9 months of last year and decided to get this version as it was said to sound better than the remaster I had...and I agree that it does... more natural in my opinion. This is the early Island Masters edition and it's in the running to be one of my all-time favourite albums (and bands!) Not too easy to describe the music though - I tried a little above - and it might take a few plays for it to start to come together for you... I had a compilation years ago and that was fine, but I recently found it's only the albums that make real sense to me now.

As ever, this is all held together by the fantastic Steve Winwood and if you're even slightly curious about this, why not give it a shot and it might surprise you to the extent that it makes you want to hear and buy everything under their name (and Winwood as well) just like me! :)
Read more
5 people found this helpful
Report abuse

Baggers
5.0 out of 5 stars Minter
Reviewed in the United Kingdom on June 28, 2020
Verified Purchase
50 year old album in very good condition as advertised. Packaging was excellent and the note tells you there is cast iron returns policy. The album is excellent.
Read more

5.0 out of 5 stars Minter
Reviewed in the United Kingdom on June 28, 2020
50 year old album in very good condition as advertised. Packaging was excellent and the note tells you there is cast iron returns policy. The album is excellent.
Images in this review

Page 1 of 1 Start overPage 1 of 1
Previous page
Next page
Pages with related products. See and discover other items: studio albums