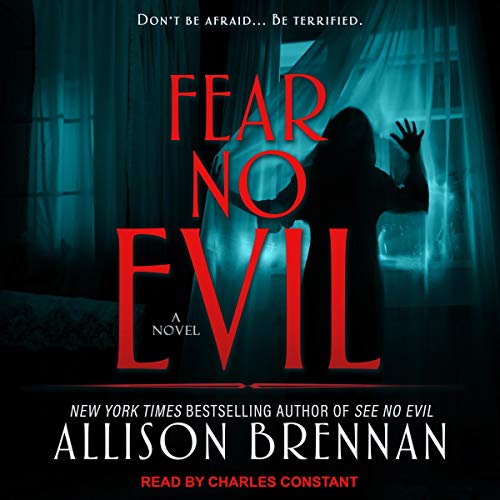 In cyberspace, no one can hear you scream.

Instead of preparing for her high school graduation, Lucy Kincaid is facing a vicious execution. Lured by an online predator, she's destined to die horribly - live on the internet - while hundreds of heartless viewers watch and vote on the method of her slaughter. Her family's only hope rests with Kate Donovan, an FBI agent who took on the same sadistic killer once before...and lost. Blamed for another girl's gruesome murder, Kate's been fighting to clear her name. But she agrees to join the hunt for Lucy - and reluctantly steps back into her worst nightmare.

With time running out before the bloody webcast airs, Kate teams up with forensic psychiatrist Dillon Kincaid to get inside the head of her twisted quarry, zero in on his chamber of horrors, and reach Lucy before grim history repeats itself and another innocent's brutal death goes hideously live.

Face the fear. Speak its name. See its face.

Turtledog223
5.0 out of 5 stars Suspenseful and Gripping
Reviewed in the United States 🇺🇸 on October 27, 2015
Verified Purchase
This was my 6th Allison Brennan novel and my favorite so far. Since I loved the other 5, that says a lot about this book. The plot is well-written and disturbing. The author does a great job getting into the minds of the criminals and other characters. They are all well-developed and complex. Usually I don't like when a book has too many characters but I absolutely love the Kincaid family and everyone associated with them. It's fun to read the next novel knowing that past characters will make an appearance.

Given that there is an entire Lucy Kincaid series, it sort of gave away part of the ending but that's ok. The book was still gripping and suspenseful. Dillon may very well be my favorite character. If I had to find one negative, I would say that I wasn't too happy with Kate as his true love. At first, I thought it would be wrong for him to begin a relationship during Lucy's ordeal. Even though it didn't really bloom until after, I wasn't happy with this choice for him and I was hoping Kate either wouldn't survive or would walk away. Or maybe hook up with Jack instead. This was the first romance in the 6 books I've read that felt forced. Oh well, maybe I just wanted Dillon for myself. :)

I know other reviewers were unhappy with Lucy being brutalized but I think this experience was necessary for her character to become who she is in her own series. There is graphic violence so readers be warned. I am so glad I found Allison Brennan and her books. On to number seven...
Read more
One person found this helpful
Helpful
Report abuse

GDG
4.0 out of 5 stars Very good conclusion to series
Reviewed in the United States 🇺🇸 on November 16, 2020
Verified Purchase
Kate is one determined woman. She is hell bent on finding a killer. Dillon finds himself in a deadly situation that he has no experience. The horrors the women suffer are bad so prepare yourself. I look forward to now reading the Lucy Kincaid series. I hope to get more glimpses of Jack.
Read more
Helpful
Report abuse

Whitey
5.0 out of 5 stars GREAT
Reviewed in the United States 🇺🇸 on May 7, 2020
Verified Purchase
This is a must read series. I read all 3 of them within 4 days. I love them. Great addition to the Kincaid family you get to know more about everyone and what Lucy had to go through.
Read more
Helpful
Report abuse

Fairyofluck8532
5.0 out of 5 stars Good book
Reviewed in the United States 🇺🇸 on April 6, 2020
Verified Purchase
I got hooked on Allison Brennan's book with the Lucy Kincaid series and I loved gong back and reading this one which told the story of what made her who she was.
Read more
One person found this helpful
Helpful
Report abuse

Renee B
2.0 out of 5 stars Feel almost betrayed
Reviewed in the United States 🇺🇸 on September 19, 2013
Verified Purchase
I can't criticize the author's writing style. None of my lackluster reviews---including the ones for the other two books in this trilogy----are because she's a bad writer. It's the content and the mostly uninspired romances. After following these characters for 6 books now, it was deeply disturbing to have one of the Kincaid's brutalized in such a way. I just didn't appreciate it, and it ruined the book for me. As for the rest of the content......the romance just plain and simply sucked. There was no chemistry and no heat, yet suddenly they were in love. The actual suspense storyline, while disturbing, was fairly interesting. But it had some holes. How exactly did Kate afford all that computer equipment? Why was Jack Kincaid NEVER mentioned before in any other book? And what about Patrick? His situation was just left hanging, not to mention he really would have made more sense as the love interest in this book since they were both computer geeks. This was definitely the weakest book in the trilogy. I'd skip all 3.
Read more
2 people found this helpful
Helpful
Report abuse

lchristy
4.0 out of 5 stars great introduction to Lucy Kincaid and her fascinating family!
Reviewed in the United States 🇺🇸 on July 14, 2014
Verified Purchase
I loved the suspense and family drama in this book. Allison Brennan weaves a story full of mystery, action and just enough emerging romance that you can't put it down! I am hooked now on the Kincaid family, and can't wait to download the next book in the series.
Read more
Helpful
Report abuse

Shelby Welch
5.0 out of 5 stars Love Allison Brennan's Books!
Reviewed in the United States 🇺🇸 on September 14, 2015
Verified Purchase
I had read all of the Lucy Kincaid stories and loved them but had not read this "back story." Absolutely loved the story of Lucy and how family and friends stick together to help each other out of trouble. How wonderful to see, too, how Dillon and Kate got together! Love Allison Brennan's books!
Read more
One person found this helpful
Helpful
Report abuse
See all reviews

S Louise
5.0 out of 5 stars the best in the trilogy
Reviewed in the United Kingdom 🇬🇧 on November 7, 2010
Verified Purchase
This book was the best book in the trilogy, I could not put it down.

Lucy Kincaid gets kidnapped by an online predator and ends up being broadcast live over the internet and people are paying to see her be raped and voting on how she should be killed.
In places this was quite scary and I found myself reading faster and faster due to the tension and the speed of the story.
Dillon Kincaid was at the centre of this book, along with his brother trying to find his sister before its too late. Kate Donovan was the other main character. A very strong character who put her own life on hold to find the killer who killed her lover and best friend.
We are also introducted to a new Kincaid brother, Jack...and well cannot wait to read his story.

The love story to this is actually secondly to everything else, yes its there but not until the end of the book. It is so fast paced that the love story earlier than it was wouldnt have seemed right and extremely quick.

I got 2 more trilogy's of Allison Brennans to read, but I think I will go back to the earlier trilogy as I enjoyed these books so much.
Read more
Report abuse

A. Gargett
3.0 out of 5 stars Better than I thought!
Reviewed in the United Kingdom 🇬🇧 on February 2, 2009
Verified Purchase
This was fast paced with a story and only a small amount of romance. Would consider reading another one of her books.
Read more
One person found this helpful
Report abuse

Penny Harvey
5.0 out of 5 stars arrived yesterday - finished today!!
Reviewed in the United Kingdom 🇬🇧 on April 6, 2007
Verified Purchase
Lucy Kincaid - the baby of the family, is kidnapped. Kate Donovan, FBI, but not really because she never went back for debriefing after a case went wrong so she's been on the run for 5 years, is on the case of the sadistic, murdering kidnapper.

She's traced by some of the Kincaid brothers desperate to rescue Lucy, we are introduced to Jack (Dillons brother), who I would really like to know a little more about (please Ms Brennan); and chase leads, cross FBI barriers and encounter real scarey sadism along the way.

Loved the characters again and the plot worked well.

This had me squirming, sweating and angry; as well as drilling (yet again) my 15 year old about the internet and it's possible dangers!!