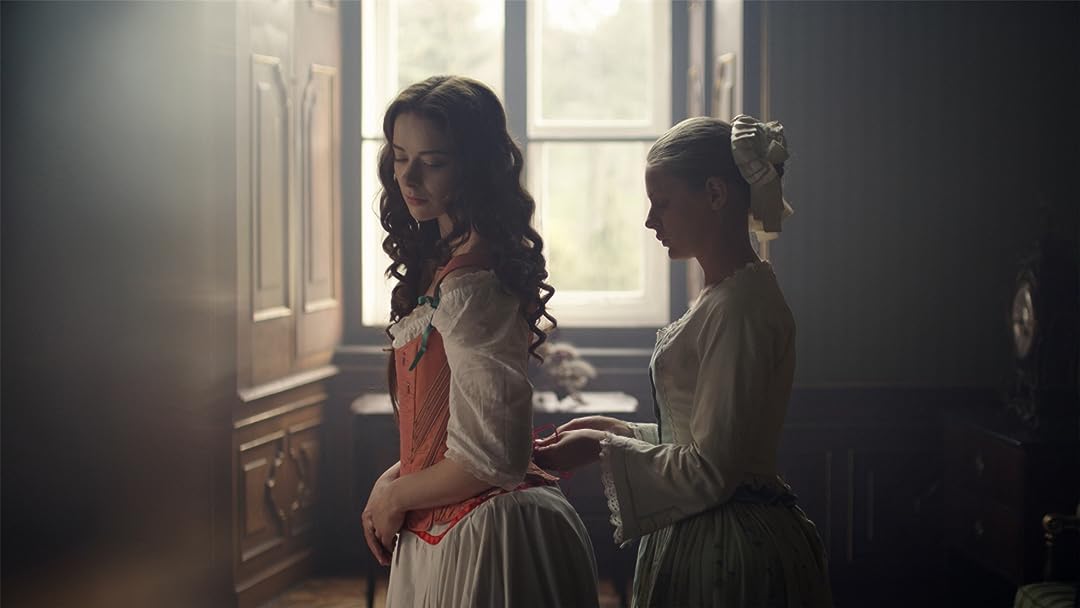 Ekaterina: The Rise of Catherine the Great

Season 1
(539)8.1201513+
This major international production traces the rise of Catherine the Great, Empress of 18th Century Russia and part of the Romanoff line. Ekaterina, a German princess, is selected to marry Peter the Third, heir to the Russian throne and grandson of Peter the Great. Her story, filled with emotion, struggle and passion shows that even in an age of imperial dynasties, power is not given. It is taken.

Playing the video isn't supported on this device/operating system version. Please update or watch on Kindle Fire, mobile devices, game consoles, or other compatible devices.
Add to
Watchlist
By ordering or viewing, you agree to our Terms. Sold by Amazon.com Services LLC.
Write review

KReviewed in the United States on June 27, 2017
5.0 out of 5 stars
Costume Drama Fans, Rejoice!
Verified purchase
This is a lush, beautiful, well-acted TV series about the early years of the woman the world would come to know as Catherine the Great.

In the beginning, she was Frederika, a Prussian princess from a family with a rich lineage but poor financial means. At a young age (she was actually much younger than the show depicts), she was carted off to Russia to marry the heir to the throne. Her intended, Pyotr (Peter) is a man-child who is often disconnected from reality and is utterly cowed by his aunt, the current Empress, Elizabeth. As sniveling as Pyotr can be, no one could blame him for wilting in his aunt's presence. She is a strong, imposing figure who rules with a very tight grip. She's a cunning politician and even more fierce than Queen Elizabeth of England over a century before.

Empress Elizabeth tries to befriend Princess Frederika, who she re-names Ekaterina, but she has an ulterior motive: she has no respect for her nephew and feels he would be a poor ruler. She pressures Ekaterina, therefore, to bear a male heir quickly, so that child can take Pyotr's place and she can have the son she never had.

It's gripping to watch Ekaterina navigate the treacherous politics and intrigues of the Russian court while trying to find love and a sense of self.

The costumes in this series make it worth watching for that alone, but the acting is also superb. The actress who playing Empress Elizabeth is incomparable and the actress who plays Ekaterina convincingly takes the viewer from her early teen years to a canny and mature adult woman.

This is definitely binge-worthy, but the episodes are best stretched out and savored because there are only ten!

G.Reviewed in the United States on October 20, 2017
5.0 out of 5 stars
MARVELOUS...Must See !
Verified purchase
Excellent for a 10 episode series. I've read a biography of Catherine the Great. While some artistic liberties were taken in the writing the overall depiction is extraordinary. Production value 10/10 Acting 10/10 Writing 9.9/10 Historically Factual 5/10 (again allow me to stress that this was a 10 episode miniseries and for it to have been historically accurate would be impossible) My highest regard for the writers, producers, director, crew, and actors. I'd ask that anyone who endeavors to watch the series, watch all 10 episodes. I watched it once for visuals. I watched again for subtitles. I will watch it again. Simply marvelous.
59 people found this helpful
Report abuse

Silver_RoseReviewed in the United States on June 27, 2017
5.0 out of 5 stars
GREAT PERIOD PIECE WITH LUSH SETS, GREAT ART DIRECTION, PERFECT MUSIC, AND FAIRLY GOOD PERFORMANCES
Verified purchase
Really great production values helped to make this series very interesting, in my estimation. Despite the fact that it was subtitled, which I just hate, I have to give this a 5-star rating. The costuming and authentic sets, great camera work, and excellent cast helped me to ignore the subtitles and really get into the storyline. The art direction was superb. If this series had a star, it was the sets! Just gorgeous. Being a history buff and enjoying period pieces, contributed to my pleasure in seeing this. I binge watched it over a series of 2 or 3 days. The actress who played the lead character of Ekaterina could have ruined it for me. Her performance wasn't very good, but it wasn't bad enough to put me off the series. Obviously, she was chosen for her great beauty, and not her talent, but the other actors helped make up the deficit. All in all, it was engaging. One important note I would like to make is that, although some of the subject matter was a bit tawdry (dalliances in the boudoir, etc.) the message was conveyed without nudity. This aspect was VERY tastefully done. I highly recommend it, and will probably watch it again sometime in the future.
90 people found this helpful
Report abuse

CenTex RailfanReviewed in the United States on September 17, 2017
5.0 out of 5 stars
Five-Star Historical Drama. I recommend it highly.
Verified purchase
A strong cast, lavish sets, well-written scripts, period costumes and music, all tied together in a solid ten-episode drama, covering the early life of the Empress who truly solidified the vast land and diverse people of Russia, turning it into a powerhouse among the nations of the world. Strong performances by the entire cast drive this production, and make it difficult to stop watching once I started. The best part for me was that it was presented in Russian and German with subtitles. I was very grateful it was not dubbed into English, which I feel would have spoiled the "feel" of the series, and would have allowed ones mind to wander, this missing key details. I would love to see a follow-up piece, detailing her reign, hopefully using the same cast and screenwriters. All in all, this is one of my favourite viewing experiences on Amazon Prime to date. I highly recommend it to anybody who enjoys historical dramas, period costumers, or foreign language films. It is a definite must watch
16 people found this helpful
Report abuse

SeattleMommyReviewed in the United States on January 5, 2018
3.0 out of 5 stars
Good but doesn't compare to quality of the PBS/Masterpiece Theater historical dramas
Verified purchase
Overall, I liked this series but I felt like it didn't always have the best transitions from episode to episode. The set and the costumes were spectacular, but not all actors were of top caliber. I still ended up semi-binge watching it (it took me about a week to finish), here is enough suspense and intrigue to keep you coming back (even though I knew the story already).

Things I liked: the story of Catherine on the whole and her determination to fight for herself and her family, about half of the cast and their acting abilities, the costumes and set design, and getting a refresher in Russian.

Things that were lacking: editing could have been a lot better, from what I understand this was adapted from the Russian series into a 10-episode season, but I suspect in Russia it might have flowed a bit better and perhaps the narration would have been different. Some of the acting including most of the "love scenes" - they seemed kind of weirdly soap opera-like and cheesy, and I can't imagine that things actually transpired that way. There are also some historical inaccuracies.

And yes, this is in Russian and German with subtitles with only a little bit of English narration. If you are watching it on a small screen/tablet, keep in mind that the subtitles might be small to read. Obviously, not an issue for those who know Russian but since some of the negative reviews complained about subtitles, I though got I should call it out.
21 people found this helpful
Report abuse

Andrei MoskowitzReviewed in the United States on August 7, 2017
4.0 out of 5 stars
Unintentionally Insightful of the Russian Character and Soul
Verified purchase
This a beautiful and fascinating production dramatizing a seminal moment in Russian history. It is not as dramatically subtle or sophisticated as the best our productions of this sort, but one can glean a lot of insight about how Russians see themselves, their politics, and their history. There is an enormous hunger throughout Russian history for wise and decisive rule, the more autocratic and absolute the more admirable.In this regard, Empress Elizabeta is perhaps the most interesting character in the series. Most of the other characters are drawn as rather stiff motifs of their sort--the wise counsellor, the ruthless diplomat, the idiotic prince, the frivolous (or completely devoted) maid of honor, and so on. Love scenes are also unsubtle, more like Mexican soaps or movies for American teens.The subtitles were written by a hilariously inept translator, and are an entertainment in their own right. The Russian language is so delicious,and the voices so impressive, that it would be butchery to dub this series.

Most important, however, if you want to understand the potent mix of emotions driving Russian politics and society today, you're much better off immersing yourself in this series rather than current news and analysis. This was not produced in a censoring dictatorship, but it is still mindful of and shares the rather simple, powerful, and often willfully dangerous sensibilities swirling in Russia today.

Not least, Marina Aleksandrova is magnificent and majestic in her portrayal. Her tragic eyes speak volumes. She must also have been swept up in the character, since she named her daughter born in 2015 Ekaterina.
9 people found this helpful
Report abuse

lizejaneReviewed in the United States on July 7, 2017
5.0 out of 5 stars
Great portrayal of this time in history
Verified purchase
So much better than BBC's Victoria. The actress portraying Catherine/Ekaterina does a fine job of making me believe in this beautiful young woman who is full of hope for a future life of love and family with the Prince. But from the beginning of their supposed courtship Ekaterina is faced with heartbreak and betrayal at every turn, even having her child taken from her. Through these nightmares she forged herself into a woman of strength that defied her circumstance. The actress playing the Russian Queen Elizabeth gives a truly Emmy worthy performance. She is powerful, terrifying, calculating, capricious and paranoid, all the things that kept her in power for so many years. Even tho it takes place over almost 2 decades, I wasn't bothered by the characters lack of aging, because I was caught up in their development and growth as people. I much prefer that to the artificial aging in Victoria and other period dramas. The costumes are gorgeous, and the machinations of court life among her predecessor are bone chilling. I was caught up in this great saga and after binge-watching on the entire season I recommend it highly.
24 people found this helpful
Report abuse

LindseyReviewed in the United States on September 13, 2017
5.0 out of 5 stars
Binge-worthy historical costume drama
Verified purchase
The episodes are subtitled and the first episode is relatively weak. The remaining 9 episodes are engaging and historically accurate, especially if you're interested in court intrigue. I often found myself googling what really happened in the time line and various other trivia-- how old was she initially, what was the prevalence of black smallpox, bread wine, why are there so many peacocks in eighteenth century russia, etc. The costumes and music bring the production to life and the two female leads are incredible. This production is relatively sympathetic to Peter III, as well, which is a nice change from other works. I binge-watched it and wish I had savored it longer, there are not many historical shows with this kind of production value.
13 people found this helpful
Report abuse
See all reviews
Back to top
Get to Know Us
Make Money with Us
Amazon Payment Products
Let Us Help You
EnglishChoose a language for shopping. United StatesChoose a country/region for shopping.
© 1996-2021, Amazon.com, Inc. or its affiliates