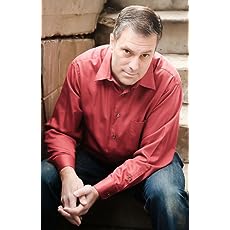 David Abrams is the author of the novels "Brave Deeds" and "Fobbit," which was named a New York Times Notable Book of 2012, a Montana Honor Book, and a finalist in the L. A. Times' Art Seidenbaum Award for First Fiction. It was also selected as a "best" or "favorite" book of 2012 by Paste Magazine, the St. Louis Post-Dispatch, and January Magazine.

David Abrams' short stories have appeared in Esquire, Glimmer Train, Narrative, Electric Literature, The Greensboro Review, The Missouri Review, and many other publications. He regularly blogs about the literary life at The Quivering Pen: www.davidabramsbooks.blogspot.com 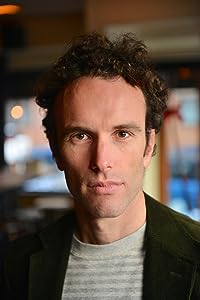 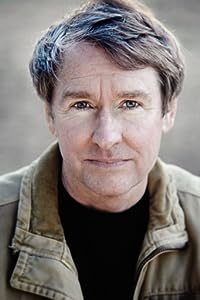 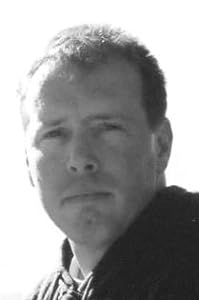 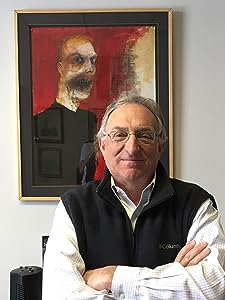 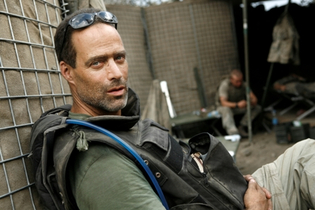 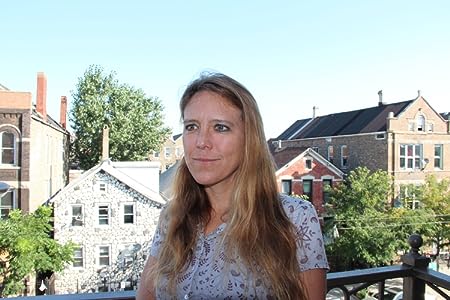 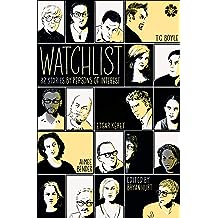 In Doctorow’s eerily plausible “Scroogled,” the US has outsourced border control to Google, on the basis that they Do Search Right. In Lincoln Michel’s “Our New Neighborhood,” a planned suburban community’s Neighborhood Watch program becomes an obsessive nightmare. Jim Shepard’s haunting “Safety Tips for Living Alone” imagines the lives of the men involved in the US government’s fatal attempt to build the three Texas Tower radar facilities in the Atlantic Ocean during the Cold War. Randa Jarrar’s “Testimony of Malik, Israeli agent #287690” is “a sweet and deftly handled story of xenophobia and paranoia, reminding us that such things aren’t limited to the West” (Sabotage Reviews) and Alissa Nutting’s “The Transparency Project” is a creative, speculative exploration of the future of long-term medical observation.

“Including work by literary heavy-hitters . . . the anthology considers the act and weight of watching and being watched . . . and in Watchlist, these see-to-know quests range from funny to terrifying.” —Los Angeles Magazine

“Smart, eclectic and carefully observed, this collection illuminates the darker corners within our culture and within our private lives.” —San Francisco Chronicle

“A boldly imaginative, diverse collection of 32 surveillance-themed stories from an international coterie of writers . . . The varied cross-section of material is stylishly captured by each writer’s distinct voice and perspective.” —Publishers Weekly
Read more
Other Formats: Audible Audiobook , Paperback , Audio CD 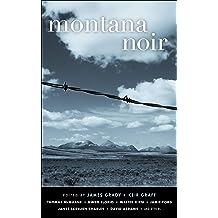 The Big Sky State may seem to lack the shadowy urban mazes traditional to the noir genre. But in Montana, darkness is found in the regions of the heart, driving the desperate and deadly to commit the most heinous of crimes. Here, James Grady and Keir Graff, both Montana natives, masterfully curate this collection of hard-edged Western tales.

“Terrific . . . Montana Noir is one of the high points in Akashic’s long-running and justly celebrated Noir series . . . varying landscapes reflect the darkness within the people who walk the streets or drive the country roads.” —Booklist

“Montana may not have the back alleys so common to noir but it has western justice which can be quick, brutal and final and that is as satisfying as anything found in the urban streets that typically attract the dark beauty of the noir genre.” —New York Journal of Books

“Certain noir standbys prove both malleable and fertile in these 14 new stories . . . If Montana has a dark side, is anywhere safe from noir?” —Kirkus Reviews
Read more
Other Formats: Paperback 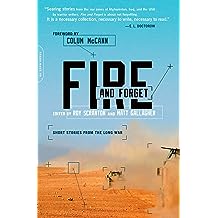 These stories aren't pretty and they aren't for the faint of heart. They are realistic, haunting and shocking. And they are all unforgettable. Television reports, movies, newspapers and blogs about the wars in Iraq and Afghanistan have offered images of the fighting there. But this collection offers voices—powerful voices, telling the kind of truth that only fiction can offer.

What makes the collection so remarkable is that all of these stories are written by those who were there, or waited for them at home. The anthology, which features a Foreword by National Book Award winner Colum McCann, includes the best voices of the wars' generation: award-winning author Phil Klay's Redeployment;” Brian Turner, whose poem Hurt Locker” was the movie's inspiration; Colby Buzzell, whose book My War resonates with countless veterans; Siobhan Fallon, whose book You Know When the Men Are Gone echoes the joy and pain of the spouses left behind; Matt Gallagher, whose book Kaboom captures the hilarity and horror of the modern military experience; and ten others. 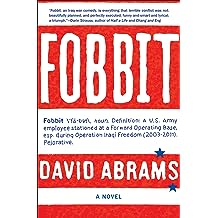 Fobbit: A Novel Sep 4, 2012
by David Abrams
( 151 )
$9.99
An Iraq war comedy that “is everything that terrible conflict was not: beautifully planned and perfectly executed; funny and smart and lyrical; a triumph” (Darin Strauss, author of Half a Life).

Fobbit ’fä-bit, noun. Definition: A US soldier stationed at a Forward Operating Base who avoids combat by remaining at the base, esp. during Operation Iraqi Freedom (2003–2011). Pejorative.

In the satirical tradition of Catch-22 and M*A*S*H, Fobbit, a New York Times Notable Book, takes us into the chaotic world of Baghdad’s Forward Operating Base Triumph. The Forward Operating base, or FOB, is like the back-office of the battlefield—where people eat and sleep, and where a lot of soldiers have what looks suspiciously like a desk job. Male and female soldiers are trying to find an empty Porta Potty in which to get acquainted, grunts are playing Xbox and watching NASCAR between missions, and a lot of the senior staff are more concerned about getting to the chow hall in time for the Friday night all-you-can-eat seafood special than worrying about little things like military strategy.

Darkly humorous and based on the author’s own experiences in Iraq, Fobbit is a fantastic debut that shows us a behind-the-scenes portrait of the real Iraq war. 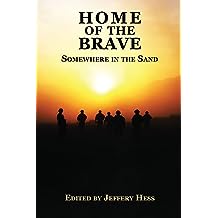 Home of the Brave: Somewhere in the Sand Jul 19, 2013
by David Abrams , Zoey Byrd , Caleb S. Cage , Jon Chopan , Paul Crenshaw , Tracy Crow , Joseph Mills , Roland Goity , Brooke King , Jeffery Hess
( 6 )
$4.84
As editor Jeffrey Hess states in his introduction, "Home of the Brave implies the American military. Somewhere in the Sand implies the desert conditions of both Iraq and Afghanistan, but also the mental state that the returning service members occupy periodically or perpetually once they return home." These twenty-two works of fiction tell those stories and allow the reader to experience war, and peace (if it can be found) after war, from both perspectives.
Read more
Other Formats: Paperback 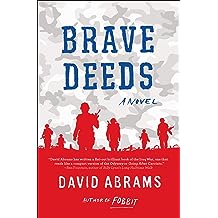 A Military Times Best Book of 2017, Brave Deeds is a compelling novel of war, brotherhood, and America. Spanning eight hours, the novel follows a squad of six AWOL soldiers as they attempt to cross war-torn Baghdad on foot to attend the funeral of their leader, Staff Sergeant Rafe Morgan. As the men make their way to the funeral, they recall the most ancient of warriors yet are a microcosm of twenty-first-century America, and subject to the same human flaws as all of us. Drew is reliable in the field but unfaithful at home; Cheever, overweight and whining, is a friend to no one—least of all himself; and platoon commander Dmitri “Arrow” Arogapoulos is stalwart, yet troubled with questions about his own identity and sexuality. Emotionally resonant, true-to-life, and thoughtfully written, Brave Deeds is a gripping story of combat and of perseverance, and an important addition to the oeuvre of contemporary war fiction.

“Earnest and affecting . . . The soldiers are foulmouthed, sex-obsessed and fiercely loyal for reasons they can’t quite articulate—in other words, packed with young American male authenticity. Abrams’s prose is relaxed and conversational, with a few scattered literary nuggets that add heft, like chunks of beef in a vegetable soup. . . . The mash-up works, and Abrams’s voice is clear and strong.” —Brian Castner, The Washington Post

“Outstanding . . . With a little bit of humor and bumbling grace, these six soldiers magnify what is both beautiful and despairing about the American military.” —Missoulian
Read more
Other Formats: Audible Audiobook , Paperback , Audio CD 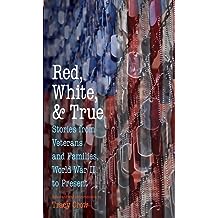 Even as we celebrate the return of our military from wars in the Middle East, we are becoming increasingly aware of the struggles that await veterans on the home front. Red, White, and True offers readers a collection of voices that reflect the experiences of those touched by war-from the children of veterans who encounter them in their fathers' recollections of past wars to the young men and women who fought in the deserts of Iraq and Afghanistan.

The diversity of perspectives collected in this volume validates the experiences of our veterans and their families, describing their shared struggles and triumphs while honoring the fact that each person's military experience is different.

Leila Levinson's powerful essay recounts her father's experience freeing a POW camp during World War II. Pulitzer Prize-winning author Tracy Kidder provides a chilling account of being a new second lieutenant in Vietnam. Army combat veteran Brooke King recounts the anguish of raising her young children by day while trying to distinguish between her horrific memories of IED explosions in Baghdad and terrifying dreams by night.

These individual stories of pain and struggle, along with twenty-nine others, illustrate the inescapable damage that war rends in the fabric of society and celebrate our dauntless attempts to repair these holes with compassion and courage.