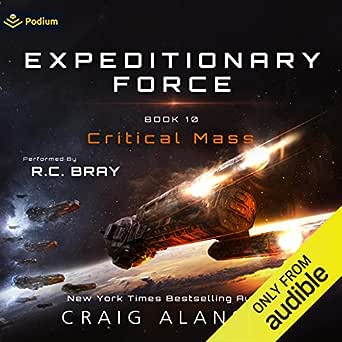 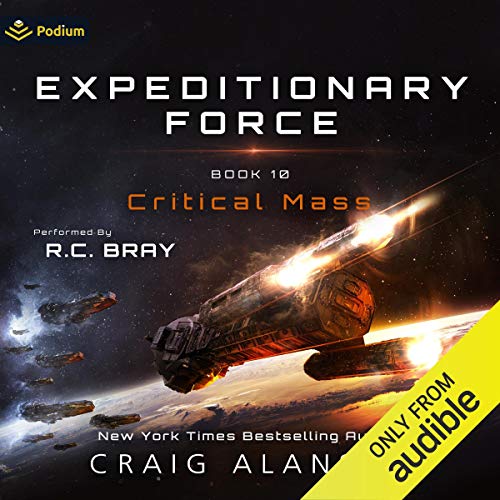 List Price: $49.99
You Save: $7.00 (14%)
By completing your purchase, you agree to Audible’s Conditions Of Use
Sold and delivered by Audible, an Amazon company

4.7 out of 5 stars
4.7 out of 5
1,073 global ratings
How are ratings calculated?
To calculate the overall star rating and percentage breakdown by star, we don’t use a simple average. Instead, our system considers things like how recent a review is and if the reviewer bought the item on Amazon. It also analyzes reviews to verify trustworthiness.
Top reviews

Chris Kaiser
3.0 out of 5 stars Frustrating
Reviewed in the United States on August 5, 2020
Verified Purchase
I'll keep this as spoiler free as I can. Book 9 ended with a huge cliffhanger. I spent some time over the last year while waiting for book 10 contemplating the ramifications -- wondering what could/couldn't be done with the new situation. Instead of dealing with the issues fall out from the cliffhanger, it was resolved with a Pitch Meeting worthy, "I bet dealing with that cliffhanger is going to be a real challenge." "Nope. No problem at all. Barely an inconvenience." "Whoopsie." The trivial way in which the author dealt with resolving that was a real disservice to his readers, IMHO. Almost as if it was too difficult to resolve in a meaningful way, so he gave up trying. There was a big wrap up to the major threat to Earth near the end of the book. I'm glad that was finally done. I'll probably stop with this series on this book. That said, I've enjoyed it overall and will be happy to read more Craig Alanson when he moves onto something fresh.
Read more
31 people found this helpful
Helpful
Report abuse

Kindle Customer
3.0 out of 5 stars Fluffernutter
Reviewed in the United States on August 8, 2020
Verified Purchase
Hmm was really looking forward to this book, after the abrupt cliff hanger of book 9, i was expecting more... I'll avoid spoilers, nothing worse than checking out reviews which make the book sound terrible, each to there own after all, however... nothing happened, it took half the book to get back to how things were, 90% of this book is pure flutternutter :) despite my strong desire to savor this much anticipated book, I ended up skim reading the latter half of it. The last 10% was awesome!, classic skippy and joe hold my beer moments :) sadly overall felt a bit unfocused. 2 stars for the fluffernutter, 4 for the end. Will get the next one.
Read more
18 people found this helpful
Helpful
Report abuse

karl bouwhuis
5.0 out of 5 stars Best Book of the Series
Reviewed in the United States on August 5, 2020
Verified Purchase
Alanson has improved almost every aspect of his writing. Over the course of the series, I would get tired of constant reminders and summaries of previous books. It felt like filler and it was almost like the author didn't trust his readers to remember previous books. There are still references to previous missions, but the filler is gone. It was a welcome and refreshing change of pace.

Characters developed well. Alanson tries to add additional dimensions to well estanlished characters, and he succeeds. Traumas should be traumatizing, and the characters react believably to what they experienced in earlier books. The addition of a new character added fresh comic relief that was very welcome. Banter is funny and snappy and has been a consistent strength in the series.

As always, events are wild and unpredictable. I've never been too great at predicting what will happen next, but Alanson is particularly good at resolving problems in unexpected and exciting ways.

Overall, this book is fantastic and showcases Alanson's growth as a writer and storyteller. It was so good I finished it less than 24 hours after purchasing. I was weary after Valkyrie, and this book has left me energized and excited for the next installment.

Amazon Customer
3.0 out of 5 stars Longer Than Necessary
Reviewed in the United States on August 16, 2020
Verified Purchase
I'll start by giving this points for doing better with the characters. Though they've generally been well done, I feel on this outing Alanson did an especially good job at making them feel more real and relatable. And as usual he gets his science, military knowledge, and pop culture references down. Enjoyable as always.

With that said, I think this may be the weakest book in the series.

For starters, the cliffhanger resolution just felt kind of weak. Without spoiling anything, Book 9 ends with a cliffhanger that leaves the Merry Band in a bit of a pickle. It's setup as a really bad situation, one that will require the Pirates to really step up their game. But it ends up getting resolved without too much cleverness, and it all feels kind of easy. The resolution feels kind of lazy as it doesn't really impact the Pirates that much for the rest of the story.

After the cliffhanger is resolved, the book just kind of continues aimlessly for a while. The Pirates never seen to be working towards any sort of goal, and there just doesn't seem to be much of a plot. The actual plot doesn't start up until a bit over halfway through. With the way Alanson writes, you basically end up reading a full length novel's worth of material before the plot ever arrives.

While the actual story ends up being good and compelling, it just makes up too little of the book. Even when it arrives, there's so much filler material that you just kind of end up slogging through until you find a part where something important happens.

There's a lot of good stuff in Critical Mass, but I feel I have to give this three stars due to the amount of effort involved in getting to that good stuff.
Read more
6 people found this helpful
Helpful
Report abuse

Jesse S. Williams
5.0 out of 5 stars Another great Expeditionary Force book
Reviewed in the United States on August 14, 2020
Verified Purchase
As always, this stupid monkey is incredibly impressed with yet another Expeditionary Force novel. This has become my runaway favorite series of not only the space opera genre, but of fiction generally. The arc of Book 10, just as with each of the books in this series, has a familiar feel, but it still hasn’t grown long in the tooth. Well worth picking up for any fan of the series. And if you haven’t read the whole series, go get Book 1 now and be thrilled for the many hours of reading/listening you have ahead of you.

Oh, and if you even sort of enjoy audiobooks, this series as read by R.C. Bray is even better still.

Lastly, due to the number of folk who seem displeased with how the cliffhanger from Book 9 was resolved... I actually think it was genius. I can definitely see why it may have seemed like an easy way out, but if my suspicions for the next major plot point of the series is correct, it’s actually the perfect setup.
Read more
3 people found this helpful
Helpful
Report abuse
See all reviews

JM
3.0 out of 5 stars Long term fans of the series may read on for closure... I don't like that I fall into this camp
Reviewed in the United Kingdom on August 27, 2020
Verified Purchase
Well what did I expect in the skippy series, where literally from day one - this godly being was coming in and not playing fair. But it's not compelling anymore.
Sadly, while amusing - possibly having a Maxhoulx capital ship has somewhat killed the series. Now they have the latest deus ex machina to resolved the issues building up from the last three books.

This book and universe is beginning to suffer from the latter series of Game of Thrones, particularly the jet-pack problem. The universe now seems small and inconsequential.
Major problems are overcome by a wave of the hand, while minor problems are dragged out for pages and pages of irrelevant text. The solutions of each of the problems seem not really playing by any of the in-universe rules developed over the series of books, so essentially it's technobabble.

I think I can think of at least three times where the author recommends a book in real life and that took me right out of the suspension of disbelief.
Long term fans of the series will probably tolerate this and read on for closure... as would I - but I don't necessarily have to like that trait in myself. I still enjoyed the camp soap opera but I can't bring myself to say that this is a positive addition to the series.
Read more
4 people found this helpful
Report abuse

Jarrak
4.0 out of 5 stars On Their Own
Reviewed in the United Kingdom on August 16, 2020
Verified Purchase
Critical Mass had a lot to live upto after the events in the ninth novel (Valkyrie) and for the most part it failed, not spectacularly but my expectations were so high it probably was always bound to fail. However despite enjoying the novel for what it was I have to admit the final few chapters went into high gear and dragged the novel upto heights I would never have expected from the first few chapters. Put it this way, I finished the novel around midnight and went to bed then chose to reread Chapters 30 onward the next day because it was that compelling.
I don't think I can say too much about the events in Critical Mass but they are significant in terms of the overall Expeditionary Force and Mavericks series and delivered the action, suspense and humour a long time reader would come to expect. Looking forward to the next novels in both series and with so many mysteries still to be explored let alone resolved it will be a wild ride.
Read more
2 people found this helpful
Report abuse

Garry M
5.0 out of 5 stars Enjoyable romp
Reviewed in the United Kingdom on October 28, 2020
Verified Purchase
Ten books in and Craig Alanson still manages to hit the reader with a late plot twist that I for one did not see coming. That said the early portions of the book did at times read as a bit formulaic. I am interested to find out what destination Joe and Skippy reach, but part of me hopes that we find out soon and not have what has been an excellent series turn into some sort of endless soap opera.
Read more
Report abuse

Colin
5.0 out of 5 stars The Awesomeness Continues
Reviewed in the United Kingdom on August 6, 2020
Verified Purchase
For those who follow the series, you won't be disappointed. This is a long and well structured story with the usual madness thrown in. I'll say no more - the AI's are brilliant - all of them!
Read more
One person found this helpful
Report abuse

richard
5.0 out of 5 stars Good round-up
Reviewed in the United Kingdom on September 4, 2020
Verified Purchase
Takes the first ten books to a satisfactory conclusion. Obviously more to come but an enjoyable read. Little bit rushed in the last 3 chapters but that’s something I’ve noticed at the end of other sf space operas.
Read more
One person found this helpful
Report abuse
See all reviews