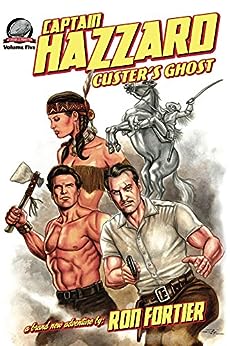 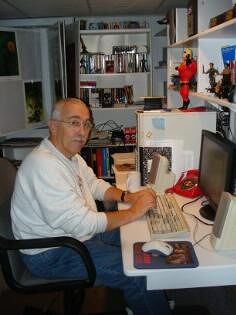 When an eerie ghost rider appears on the Fort Peck Indian Reservation and begins butchering innocent lives, native superstitions are fueled. Could this wraith actually be General George Armstrong Custer returned from the dead to seek retribution for his massacre at the Battle of Little Bighorn? Then, when gangsters attempt to kidnap a Sioux Princess at a prestigious college in New York, Captain Hazzard and his team of adventurers soon find themselves flying to Montana to unravel a truly bizarre mystery.

Accompanying them is Jim Anthony, the famous Super Detective, along with his grandfather, the Comanche shaman, Mephito. Somewhere in those rugged mountains and plains lies a secret from the past that will change Anthony’s life forever. But to uncover it, he and the Hazzard team will have to risk all and solve the mystery of Custer’s Ghost!
Read more
Previous page
Next page

Limited-Time Offer
3 Months FREE of Audible Premium Plus. Get this deal

Started writing comic books back in 1983 and been at it ever since. Have written over 600 hundred comic scripts. Started Airship 27 Productions eleven years ago to write, edit and produce new pulp novels and anthologies. My own work can also be found in Moonstone Books pulp anthologies as well. Rest of my day is spent spoiling the hell out of my six grand kids. Oh, and the five kids aren't too bad either. Hope people who read my stuff have fun with it.

Willard Onellion
VINE VOICE
5.0 out of 5 stars fantastic pulp adventure
Reviewed in the United States 🇺🇸 on July 28, 2022
Verified Purchase
If you like Doc Savage and other pulp heroes of the 30s and 40s you will love this book. Action packed from start to finish it is in the best tradition of action pulps. Captain Hazzard once again saves the world from the villains. Get it, you will love it.
Read more
Helpful
Report abuse

Raven
VINE VOICE
5.0 out of 5 stars The ghost of a man long dead haunts the reservation of the Indian tribe that killed him…
Reviewed in the United States 🇺🇸 on March 13, 2017
Verified Purchase
Possible spoilers, but little more than reading the back of the book, I am certain…

The story begins on June 25, 1876, the day that Lieutenant-Colonel George Armstrong Custer and his 7th Cavalry were wiped out at Little Bighorn. There was a gathering of Native Americans like never seen before or since. A Sioux mother tells her son that Custer is his father. The woman and her son are sent away by Wind Song, known as a powerful witch. The boy has a destiny with fate…

Moving on into the 1930’s, the Sioux are now on the Fort Peck Indian Reservation in Montana. Two hard drinking natives are struck down by what appears to be the gleaming ghost of Colonel Custer himself! Meanwhile, Captain Hazzard is testing a new rocket-pack and stopping bank robbers.

At Eastgate Collage, Azela O’Hare, the lovely Eurasian beauty who is in love with Captain Hazzard, helps a fellow student; Princess Dancing Moon of the Sioux tribe escape from would be kidnappers. Dancing Moon says she has been told to seek out Jim Anthony, since this adventurer has Native American Blood. Azela goes with her to Captain Hazzard, who will take them to Jim Anthony at his headquarters, the Waldorf Anthony Hotel.

At the Waldof Astoria, a bomb goes off just as Hazzard, Jake Cole, and the two ladies arrive. Jim Anthony and his grandfather Mephito come to investigate from the penthouse atop the hotel. The gangsters that tried to kidnap the Princess are trying to kill Jim Anthony. They are joined by three creatures out of nightmare, known to Native Americans as Skinwalkers…

This book is a credit to both Captain Hazzard and crew and Jim Anthony, Super Detective! The two heroes play off each other with dexterity that somehow makes both of them shine! Hazzard is a man of science, but willing to expand his horizons when faced by the supernatural. Jim Anthony is also a scientist, but he is in strong connection to his Comanche roots. His grandfather, old Mephito, is a shaman of his people and often has visions that warn Anthony of dangers.

The ghost of Custer and the Skinwalkers appear to be in cahoots with each other. The question is why. All of the silver and copper mines in the area have been abandoned when the ore gave out. What secrets are the bad guys hiding, and can Hazzard and Jim Anthony stop creatures that appear to be impossible?

Captain Ron serves up another delicious delicacy from Airship 27! Spicy and filled with plenty of pulp action; it will be a wonderful read for all who love the larger than life heroes of the old pulp magazines!

I give this book five stars plus!

The latest outing is an unswerving, super-charged package, with our rocketing, telepathic hero tackling a series of mysterious scenarios (spiced by kooky crooks and supernatural beasts), with the highlight being the advent of George Armstrong Custer's ghost. However, is it truly the legendary general's spirit (carried via his faithful, spectral stallion) that's returned to avenge his loss at Little Big Horn?

Whatever the cause, citizens of the Fort Peck Indian Reservation are receiving the brunt of the wraith's wrath--attacked by the ghastly, sword-slashing thing, no less--and the dare-deviling Kevin Hazzard must squash the mayhem.

However, the eerie entity isn't the only obstacle with which our Champion of Justice must contend. He learns that gangsters have tried to seize a beautiful, Sioux princess named Dancing Moon from her NY campus, leaving Hazzard and his brave team to unravel the hows and whys. The ultimate question is, does the princess' attempted kidnapping in any way connect to the ghost? Well, you'll just have to read to find out, but for what it's worth, Super Detective Jim Anthony and his Comanche shaman grandfather, Mephito, figure in, and what develops will have you howling at the moon--hint, hint.

What makes this Hazzard adventure click is its unpretentious delivery of nostalgic thrills. Hazzard and his exploits not only spring from a pulp-fiction platform (particularly Doc Savage's), but also those wonderful, action-packed, chapter plays of decades past. And as most fans know, the old movie serials are generally considered unequaled in their breathless zest, but "Custer's Ghost" matches the best of them.

This also makes Fortier's novel, along with Davis' detailed illustrations and Pat Carbajal's Hollywood styled cover, a guaranteed escape from the mundane. Heck, why pay a handsome fee for some oh-hum vacation, when for under $20, you can indulge in a grandiose getaway through Fortier's rollicking words?

Barry Reese
5.0 out of 5 stars Another Great Adventure
Reviewed in the United States 🇺🇸 on March 26, 2017
Verified Purchase
Ron Fortier’s Captain Hazzard series is one of New Pulp’s best and it does that rarest of feats – it gets better as it goes along. This is the fifth entry and it’s by far the best.

This one features an old west theme as Custer’s ghost is apparently on the loose and a group of Skinwalkers has joined its ghostly cause. Along for the ride is Jim Anthony, the classic pulp hero dubbed ‘The Super Detective.” Fortier does a great job of balancing Hazzard and Anthony, giving each moments to shine. Hazzard gets a fantastic action sequence at one point wearing a Rocketeer-style jet pack, battling fighter planes. Anthony’s best sequence features him going toe-to-toe with the leader of the Skinwalkers.

There’s plenty of romance, too, as we’re introduced to the lovely Dancing Moon and see the return of Azlea O’Hara, who continues pining after Hazzard in humorous fashion.

The cover by Pat Carbajal is fantastic and Rob Davis is back again to depict the heroes in a series of interior pieces.

J. Gallagher
5.0 out of 5 stars Captain Hazzard; Custer’s Ghost
Reviewed in the United Kingdom 🇬🇧 on January 10, 2017
Verified Purchase
Writer Ron Fortier continues to breath new life into all but forgotten pulp hero Captain Hazzard. Here he teams up with another hero from that era Jim Anthony; Super Detective a half Irish, half Comanche superman. Thinking about it, back then, it was probably a bold move on the part of the publishers to have a Indian (Okay half Indian... but Anthony spends a lot of his time stripped down to a loincloth running around with a tomahawk... so he seems a lot more Indian than he does Irish.) as the hero of a series of books.
Anyway, this is a very enjoyable fast paced read. The author has managed to recaptured the old pulp reading thrill so successfully ( It’s even got a jet-pack in it.) that, whilst I was reading this story, I kept visualised it all happening in black and white, like some old RKO cliff hanger serial from the thirties. With Errol Flynn as Captain Hazzard and maybe Johnny Weissmuller as Jim Anthony.
Read more
Report abuse
See all reviews
Report an issue
Does this item contain inappropriate content?
Report
Do you believe that this item violates a copyright?
Report
Does this item contain quality or formatting issues?
Report