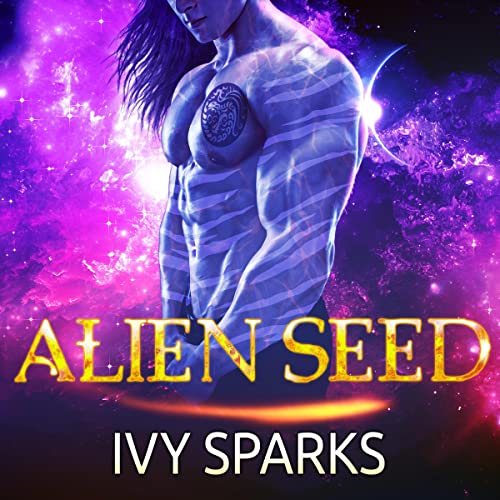 Alien Seed: Warriors of the Oasis

Ivy Sparks (Author, Publisher), Azalea Blau (Narrator)
4.4 out of 5 stars 533 ratings
See all formats and editions
Sorry, there was a problem loading this page. Try again.

They won’t release me until I breed with the alien beast….

After crashing onto a desert planet filled with alien savages, I find myself struggling to survive. My sister relies on me for her medicine, so I must get back to her.

Problem is, a lone alien with an intense stare and brands on his chest has been stalking me from afar. When he finally approaches me, I’m surprised to learn he wants to help.

But just as I’m given this lifeline, we're both captured by a savage tribe. They want him to take me by force, to prove to everyone that he’s the vicious beast they say he is.

Either he claims me, or all the warriors of the tribe will. We both have the same priority—survival. But will I make it out of this trial the same person?

Or will our mating transform me entirely, inside and out?

By completing your purchase, you agree to Audible’s Conditions Of Use
Sold and delivered by Audible, an Amazon company

Nancy E. Guthery
5.0 out of 5 stars Exciting Read
Reviewed in the United States 🇺🇸 on January 8, 2023
Verified Purchase
Alien Seed is an exciting read. It is a wonderful rendition of true mates. I have a soul mate like this. We’ve been married for 52 years. Mates look after each other in all different aspects of life. This story is told true to life for mates. You should read and decide for yourself if this is how you believe love should be.
Read more
Helpful
Report abuse

Debbie Kilburn
5.0 out of 5 stars Crash and run
Reviewed in the United States 🇺🇸 on November 15, 2020
Verified Purchase
Ava's shuttle started to come apart and she was still strapped to her seat. She blacked out when she hit the ground. When she woke up, she realized that she was alone. She salvaged what she could and started walking in the direction of where she thought the space port was. Her imagination was working overtime of sand terrors. Just then a sand beast appeared! All she had was a pocket knife but she managed to kill it. Then five more showed up, then she heard gunshots. She had been saved, or had she? Ava was becoming alarmed at who saved her. They were looking at her as if she was a prize. She blacked out again. When she came around, she was in a witch doctor's hut. She started examining her, poking and proding her. To check if she was fertile! Ava got the idea of what they had planned for her. She was looking for an escape, when she heard " not yet" in her head. Maybe she hit her head harder than she thought. The witch doctor told her that she would be awarded to a higher ranking hunter. But he was an animal of an alien man. As soon as they got to his hut, he forced a liquid down her throat. All of a sudden, she was paralyzed. All she could move was her eyes. Then she heard the voice in her head again. That monster she had been given to lay beside her, dead. Another alien wrapped her in a blanket and carried her out of there. He told her not to worry, he would take care of her. Drifter had prepared a cave for her beforehand. He took care of her until she was able to move again. She suddenly felt safe. It was the voice in her head! He carried her out of the oasis until they got to the sand. Then he put her on her feet. And the race was on! As they talked, Ava and Drifter grew closer. But she had to go back because her sister was sick and dying without treatment. You'll have to read the book to find out how they got through it. I think you will be surprised but delightful. Bully for the good guy!
Read more
6 people found this helpful
Helpful
Report abuse

Jennifer
5.0 out of 5 stars survival
Reviewed in the United States 🇺🇸 on September 20, 2022
Verified Purchase
Ava’s shuttle crashes and she left defenseless in the desert of an alien planet. She searches for a fellow traveler and runs into the worst beast on the planet. Survives them to be captured by one of the many tribes on the planet. She also feels as is someone is watching her intently. She escapes only to be captured by another tribe. Can she escape this one? Will the one she feels connected to her save her? Can she save her sister who is the whole reason why she is on this planet? Come on in and find out.
Read more
Helpful
Report abuse

kymagirl
5.0 out of 5 stars Exiled, lonely male finds his fated mate
Reviewed in the United States 🇺🇸 on June 22, 2022
Verified Purchase
Ava (h) is on a shuttle which crash lands in the remote desert on the alien planet's she's been working on. She has to battle alien creatures to survive but finds herself in even more danger when she's captured by one of the insular oasis tribes of the desert, the Vex. They plan to give Ava to one of their tribesmen for breeding purposes. Luckily for Ava, Drifter (H) an exiled male from another tribe has been observing her and rescues her. Drifter senses Ava is his mate but is hesitant to act on his feelings for her since Ava needs to leave the planet to care for her terminally ill sister. The pair will face action, adventure and threats before they'll finally be able to reach safety and their HEA. So hot, sexy and intense. I loved how different Drifter is from so many of his tribesmen and how caring he is towards his fated mate.
Read more
One person found this helpful
Helpful
Report abuse

Mary S.
4.0 out of 5 stars 21 above
Reviewed in the United States 🇺🇸 on August 6, 2022
Verified Purchase
main lady working on alien planet to raise money to take care of her sister.
main man a loner but good heart. but miss judged

Amie
5.0 out of 5 stars A amazingly saucy alien lover romance!!
Reviewed in the United States 🇺🇸 on August 4, 2022
Verified Purchase
Amazing story of a woman finding comfort in her alien male savior to find out that they're fated mates, going threw alot of ups and downs. They're heroic making it threw the tough times to get her sister a cure she needs as well as a child in her womb and a tribe to be with. Such a truly steamy romantic suspenseful thriller with a happily ever after ending you will love.
Read more
Helpful
Report abuse

Christine
3.0 out of 5 stars I Liked This Story
Reviewed in the United States 🇺🇸 on September 26, 2022
Verified Purchase
This was a really nice story. Some authors think that if they make 50% of the book sex it is a winner. When they do that they seem to ignore what could have been a really wonderful story. This story was a nice blend,of both. I loved the characters.
Read more
One person found this helpful
Helpful
Report abuse

Kyanna
5.0 out of 5 stars Amazing!
Reviewed in the United States 🇺🇸 on September 26, 2022
Verified Purchase
Definitely a great read! I would recommend. Can't wait to read more! It was quite lovely and humorous! Overall a good story!.
Read more
Helpful
Report abuse
See all reviews

Amazon Customer
4.0 out of 5 stars Engaging Read
Reviewed in Australia 🇦🇺 on December 28, 2020
Verified Purchase
A little slow to start, but a great read overall. Characters were fun and took you with them all the way on their journey.
Read more
Report abuse

Patricia
5.0 out of 5 stars N/A
Reviewed in Canada 🇨🇦 on February 19, 2021
Verified Purchase
A fantastic read! I didn't want to put it down! I could *see* the story unfolding in my mind! Great storytelling
Read more
Report abuse
See all reviews